Allen Iverson wants to be a Celtic 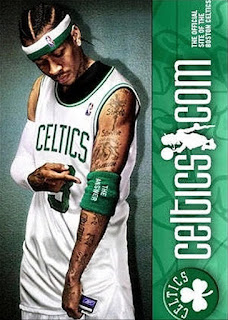 And what is more, he already wanted to wear green by 2006:

Iverson thought he was headed to Boston in a draft-night trade in 2006 for Wally Szczerbiak and the seventh overall pick, a selection the Celtics eventually traded to the Trail Blazers.

“He was really looking forward to the opportunity,’’ Moore said. “And to come back there, why not come back? Why not the Celtics?’’

The Celtics also considered Iverson before he signed with the Grizzlies

As reported by the Boston Globe today, the Celtics seem to be option #1 for Iverson in his wish list. The Celtics will need to acquire many players for their bench in a limited time provided the lockout ends this week. Adding Iverson may be something Doc and Danny have already contemplated to do during these longs months of lockout:

Now, after a year off, Iverson said he is ready to end his career in a more heartening fashion. Knowing that the Celtics will be seeking help, Iverson’s manager, Gary Moore, told the Globe his client would love to come to Boston.

“I have already spoken to Allen about that and many other opportunities, and of course he would be interested in anywhere in the NBA but Boston is particularly attractive to him,’’ Moore said, “because of Danny Ainge, the organization, and one of the most respected coaches he knows in the business in Doc Rivers.

“He has the utmost respect for Doc Rivers and the current roster of players. Allen would relish the opportunity to play in that organization.’’ 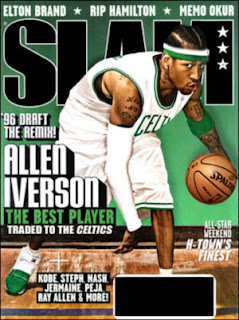 The prospect of Iverson wearing Celtics green may make some fans cringe. Personally I always wanted to see how Iverson would do with us, same as it happened with Shaq. Iverson has always been a me-first player and a volume shooter, but at the end of his career we may use some much needed scoring from the bench. If in shape he would be an upgrade over Arroyo and Bradley and an insurance guy for Delonte's frequent injuries. We need talent and scoring from the bench and Iverson is one of the best guards in the history of the game.

I guess it all depends on Iverson's ego, legs and heart and on Ainge's twisted mind.

The Big 4 already welcomed strong personalities such as Rasheed Wallace, Stephon Marbury and Shaquille O'Neal among others. Allen Iverson had invited Paul Pierce to his charity event programmed for this weekend. Although the event was finally delayed due to the lockout crucial events of these days, this may indicate something between the lines. Or maybe it is just speculation, but in any case some food for thought while we wait for Monday and Tuesday's players meetings.