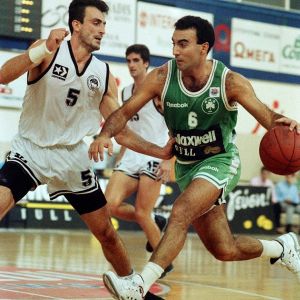 Born on July 23rd 1957, just 2 months after The Celtics' first NBA Title, Nikos Galis was born in New Jersey. The son of two Greek immigrants Galis took to basketball after being forced away from boxing by his mother, who was horrified by the injuries her son had sustained. Nick attended Union Hill High School in Union City, New Jersey.

After high school Galis enrolled at Seton Hall University. Nick played for The Pirates for 4 seasons and finished with career averages of 20 pts, 2.3 reb, 3.7 ast. He also shot 50% from the field and 81% from the free throw line. In his senior year (1979) Galis ranked 3rd in the nation with 27.5 points per game... right behind Larry Bird with 28.6. Nick was also awarded the Haggery Award, other winners include Satch Sanders and Chris Mullen.


Following his 4 year college career Nick hired an agent and entered the 1979 NBA Draft. Galis didn't work out for a single team but ended up being picked in the 4th round by The Boston Celtics. In Training Camp Nick played alongside fellow rookie Larry Bird. He showed promise up until severely injuring his ankle and losing his spot to Gerald Henderson. Out for the foreseeable future, Boston elected not to sign their 4th round pick.

After being turned away by Boston Galis focused his sights on Greece's A1 League. Nick would go on to dominate in Europe, leading The Greek League in scoring for an entire decade (81-91), winning the Greek MVP 4 times (88-91), winning eight Championhips in 9 years, winning 7 Greek Cups, and repeatedly tearing up FIBA's International Basketball tournaments. Galis' team "Aris B.C." at one point won 81 games in a row between 85-88. Basically while Larry Bird and Magic were dominating in The U.S. Nick Galis was dominating by himself in Europe.

Galis is rumored to have been offered contracts by The Celtics and Nets but turned them down because FIBA, at the time, didn't have professional status. Meaning that becoming a professional in America would make him ineligible to play for the Greek National Team.

Nick Galis may not have been the same playing in The NBA that he was in Greece, there's obviously no way to tell, but if Galis was half as good as he was over there... The 80's could have been even greater.

In 1979-80 The Boston Celtics started Archibald and Chris Ford as their backcourt with rookie Gerald Henderson coming off the bench. Halfway through the season they would sign veteran "Pistol" Pete Maravich to carry backup SG duties. In hindsight they probably should have signed Nikos Galis to a 1 year deal and let him heal his ankle, but as usual hindsight is always 20/20.

Red Auerbach was later quoted as saying that not signing Nikos Galis was the single biggest mistake in his legendary career.

Galis playing alongside Larry Bird in a College All-Star Game