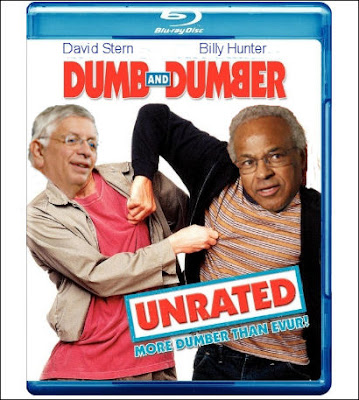 One hundred and eleven days into the lockout, the owners and players met with a federal mediator to try to bring the two sides together.

They met for 16 hours on Tuesday, going into well into Wednesday morning.  They then met again on Wednesday and Thursday.  And word out of the meetings was that the two sides were making progress and a deal was possible.  Herr Stern even hinted that the season could start in 30 days.

It sounded good and fans were hopeful.  That was, until the meeting broke up yesterday and both the players and owners came out of the meeting calling each other liars and saying that the other side was the reason for the complete breakdown in talks.

The owners say they won't meet again unless the players agree to a 50-50 split.  The players won't agree to a 50-50 split and want to know the rest of what's being offered before meeting again. So as of right now, they aren't even talking unless it is to call each other names or to insult each other.  Both sides are more dug in than ever to not give an inch to the other side. Both owners and players came out of the meeting expressing their willingness to miss the season. The only ones not willing to miss the season are the fans who put out all the money they are fighting over.   I sure am glad they got that mediator.  Think of how far apart they'd be without him. Oh, wait.....