Dooooooo!!!  Say it with me: Doooo!!!  And I'm not talking about Bryan Doo.  If you followed the Celtics back in the early 80s you may remember the calls from the Garden for this week's WTHHT player, Terry Duerod.

Terry was a 3rd round pick of the Pistons in 1979 after having a very successful career at the University of Detroit (playing with future NBA players Terry Tyler, John Long and Earl Cureton under coach Dick Vitale. [Tangent time: how did Vitale swing that?  The University of Detroit Mercy with 4 NBA players?  Granted Cureton didn't play with Long (off by a year) but still.  The most successful player out of there in the last 30 years has been Willie Green]).

After getting plucked in the expansion draft from the Mavs in 1980 [tangent 2: how many WTHHT guys were picked in expansions drafts?  To this point it's been: Mel Counts, Bud Olsen, Jeff Judkins, Steve Kuberski, Mark Acres,  Blue Edwards, Zan Tabak and Acie Earl.  If I ever consider changing the name of this segment, anything with "Expansion" in the title might work.  The Expanders?  The Expandables?  The Expansion Draft Crew?] Terry would be waived by the Mavs just 2 months into the season. 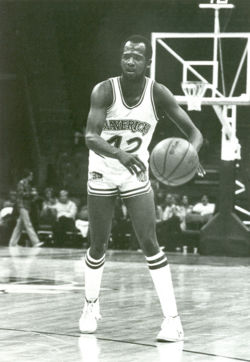 "I was getting decent playing time," said Duerod.  "My shooting touch was good, and I was fifth on the team in scoring.  Next thing I know, they call me in after a practice to tell me they had released me.  No one explained why."

A tough break (similar to what Carlos Clark encountered in Sacramento).   Fortunately for Terry the Celtics were interested and signed him to a 10 day contract.  After sticking around for a second 10 day contract, Duerod would put on a shooting exhibition in a game against the Nets in January.  Knocking down jumper after jumper (during the last 5 minutes of a blowout win) Terry got the entire crowd going, chanting "DOOO, DOOOO, DOOOO."  When the final buzzer sounded the fans were still cheering.  Duerod recalls the night:


"I guess I was smiling, I don't remember.  It was like being in The Twilight Zone.  I couldn't believe how the crowd had reacted.  I mean it was just garbage time...To see and hear everyone cheering for me like that, it was unbelievable, something I'll never forget."

Terry appeared in 10 games during the playoffs that year, when the Celtics would win their 14th championship.  Terry was proud:


"Being a part of that team, getting my ring, those are memories I always think about."

I never got to see Terry play, but he sounded like an Eddie House or Tony Delk: a guy who could come in and provide great outside shooting and score lots of points in bunches.

He would stick around for the following season too, 1982, being kept mostly on "injured reserve" (before NBA teams were allowed to have 15 players per roster there would always be guys with mysterious injuries).  He'd play 5 games with the Warriors the next season before moving onto the CBA where he played with the Detroit Spirits.  A season with Scavolini in the Italian League (just like Darren Daye) and two years in the Phillippines, Duerod retired from basketball.

For the past 20 years Terry has been a firefighter in Detroit for Engine 8.  His official title is FEO, which stands for Fire Engine Operator, as he's recently become able to drive the trucks as well.  Apparently he has a little bit of Johnny Bach in him as well artistically-speaking: at the Engine 8 Firehouse there is a mural that Terry painted.  Despite scouring the web I unfortunately couldn't find any recent pictures of Terry (although according to this site he now sports a bulging paunch).  His last known address was 17346 Pembroke Ave, Detroit, MI 48235 where he lives with his wife Rosemary, if someone can snap us a picture of him!