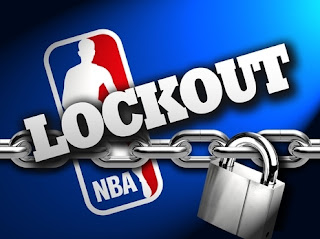 Well today's the day when the owners are reportedly finally supposed to make a new collective bargaining offer. It's Day 75 of the lockout and they haven't made an offer yet. Not since back in June when they presented NBA players with a bend over and take it or leave it offer.
So either one of two things will happen today. One option is the owners will come off their hard stance on a hard cap and non guaranteed contracts and make a fair offer to the Players Union. It wouldn't be something the players would immediately accept, but it would get negotiations underway. I'm sure the Players Union would then increase their offer to the owners and negotiations would finally start in earnest towards a new deal. This first option would show that the majority of owners (and David Stern) really want a season and aren't determined to strip fans of one. It takes two parties to negotiate and so far only the players have been willing to make concessions.

The second option is that the owners today present a piss poor new offer to the players, with minimal concessions from the previously mentioned "bend over offer." This would be done to make it appear like the owners are trying to get a deal done, but in reality are fine with the season being cancelled.

So the ball is in the owners' court. Do they care about the fans? We'll find out today.