What the Hell Happened to...Mal Graham?

This week in WTHHT we look back on the career of the 4th player produced from Westchester County, NY (after this guy, this guy, and this guy).  Perhaps you remember Mal Graham.  Mal was from White Plains, NY and attended White Plains High School.

After playing for the Tigers of White Plains, Mal went on to play at NYU, while they were still a competitive team (Satch Sanders also went there).  After an illustrious college career which included being named an All American, he'd be selected by the Celtics in the first round of the 1967 NBA draft, with the 11th pick. 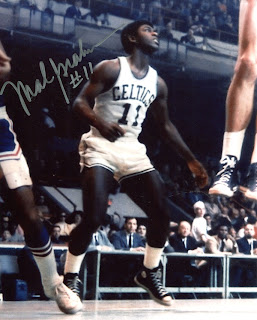 However the second half of his rookie year Mal spent on a military base in Fort Dix, NJ.  But there was something wrong with him.

Graham continued to feel physically drained during practices and games. A check-up revealed he had sarcoid, a disease which leaves the body feeling fatigued. Heeding the advice of his doctor, Graham opted to take a year off in hopes that his condition would improve.


Unfortunately, Graham was never able to play again and retired from playing.  As was the case with Clarence Glover, Mal wouldn't last long:  just 2 seasons with the Celtics, for a total of 70 games played.  His first season he played in 48 games, actually averaging 6 points in 16 minutes a night.  The next year was much more limited as he only appeared in 22 games and averaged under 5 minutes a game.

But in true Celtic fashion, Red Auerbach instilled in his teams and the bond he had with his players, Auerbach hired Graham to be the Celtics first-ever Chief Scout. In this position, Graham's primary duty was to scour the collegiate circuit and make recommendations to Auerbach as to who the Celtics should draft. Auerbach's decision to hire Graham in this capacity paid huge dividends that the organization would reap for an entire decade as he was a major reason they drafted Dave Cowens.

After serving as chief scout, Mal decided to take a different path in his life.  He explains:

"I grew up in the 60's, when the whole social fabric of the United States changed as a result of decisions being made by the courts. The legal system played a very important role in the lives of minorities. I felt I could make a difference in some lives. I thought that it was a very noble calling."


Graham entered Boston College's School of Law and graduated with his J.D. in 1974. He took his first job in the field as a lawyer with Peabody and&; Brown, a Boston firm, dealing mainly in civil trials, as well as administrative and labor law.

In 1982, Graham was appointed to the Roxbury District Court and it was here that he began to preside over civil matters and deal directly with young people from challenging socio-economic backgrounds. He served there until 1986 when Governor Michael Dukakis appointed him Massachusetts Superior Court Justice, the highest court in the state's jurisdiction. He continues to work in this capacity today.


"It was a time in which the city was being reshaped," said Graham of his early years as a lawyer and judge in Boston. "There were many efforts to make Boston a world class city, and we are seeing the results today of what we did to improve our city."


Since then, Graham has gone on to preside over several high profile cases, including the Richard Rosenthal

"Ziti Killer" case. He is on the governing bodies of many local and national law organizations, serving as President of the Massachusetts Black Judges Association. He also received a Judicial Excellence Award from the Massachusetts Judges Conference in 1998. Graham founded and still presides as President of the International Judicial Exchange Program, a program that gives judges from around the world a chance to experience other legal systems. He is also on the Board of Trustees of the New England Sports Museum.

In 1992, he was honored by the National Collegiate Athletic Association with its Silver Anniversary Top Six Award, which recognizes six individuals nationwide each year for outstanding achievement over the past 25 years in both athletic and professional endeavors.

Throughout his career in law, Graham has remained loyal to the Celtics tradition. He still attends home games and stays in contact with many of his former teammates. He still cares for the Green and White now as much as he did when he drove hundreds of miles to play for them as a rookie. He still has Celtics Pride in his soul.


"What is important to me as a member of the organization is that we have teams that are highly competitive, that they play hard and represent the spirit of the Celtics on the court," said Graham. "You can't always win, but if you do those things you will win your share of games. It is a wonderful and special feeling to be part of those great teams. But I get no great satisfaction in that the Celtics teams since have not been able to (win back-to-back titles). I will be very happy when the teams I played on no longer hold that distinction. We want that tradition to continue."


And of all the professions our WTHHT featured players have taken up, no one has replicated Mal Graham's achievements.  Today Mal continues on and is an Associate Justice on the Massachusetts Appeals Court, where he was appointed by Governor Mitt Romney in 2004.  He had been a part of the Stress Management Committee of the District Court where he co-authored the document known as Judicial Wellness: A Stress Management Guide For and By Judges.  He lives West of Boston with his wife Joyce.