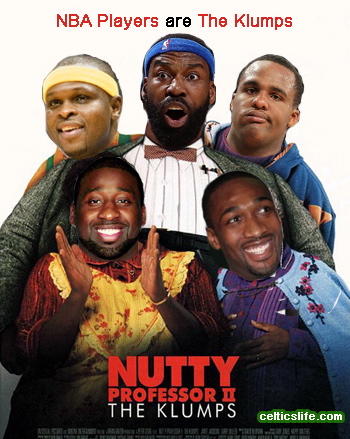 If you followed the NBA during the last lockout, you'll recall a bunch of players got fat and this essentially led to their careers ending. So a few months ago tb727 and I were talking on the phone and trying to predict who was going to blow up this lockout. Baron Davis, Zach Randolph, and Raymond "Fat" Felton were definitely three guys on the top of our list. I guess they were on Bill Simmons' as well as he wrote a column on this weeks after our convo. (Remind me to check to see if my phone is tapped. Also remind me to mention how can Bill Simmons be considered Mr. Celtic Fan if there are over 54,000 diehard Celtics fans following @CelticsLife on twitter and he's not one?) If someone has the link to Simmons' column please add it in the comments. I tried to find it, but no luck.

So who do you think will blow up? The most likely candidates are guys who have had weight issues in the past and veterans already on their last big pay days. For the latter reason, guys like Glen Davis and Eddy Curry are actually not prime candidates. They are free agents and need to lose weight (and Curry reportedly has lost 50 pounds already). Then again guys who love to eat, can always fall off the conditioning wagon.
My picks are Baron Davis (veteran on big contract and tends to get fat), Raymond Felton (Free agent in a year, but I still think he'll gain weight. Gut feeling I guess. No pun intended), and my dark horse is Gilbert Arenas. I was going to include Zach Randolph, especially after he just signed a new long term deal (Why Chris Wallace would sign him right before the lockout only tb727 could tell you.), but I've heard reports he's actually leading efforts to get the Grizzlies to work out during the lockout. I still wouldn't be shocked if he puffed up. His idea of working out might be passing some Ricky Davis around and then opening bags of Doritos. Don't count him out.

Who you got?
About Afternoon Delight: Every weekday at 3 PM Eastern time, Celticslife.com posts an original (most of the time) humorous creation for your delight. Check back tomorrow for more, or view past Afternoon Delight postings.