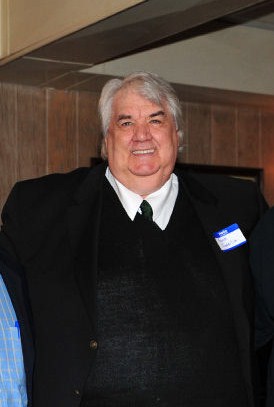 Gene was a 6'5 forward picked 14th overall in the 1959 draft (that would be considered the second round, pick #8 back then) out of George Washington University.

In December 1959 Boston placed Guarilia on its farm out list to trim their roster to the required 10 player limit (see they always wanted a D-League!)  [Tangent time: imagine the NBA rosters were kept at 10 instead of 12 and eventually 15?  And imagine if NBA teams never expanded from 8 to 30?  WTHHT would be screwed big-time and would likely not even exist.  Sort of like when Marty McFly goes back and George and Lorraine may not meet each other and his image from his picture begins to vanish.  Classic movie  Speaking of which, Marty really could play the guitar.  Foreshadowing at its best]. 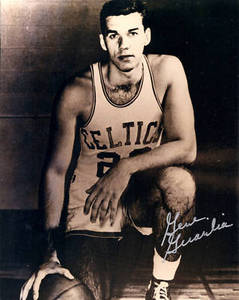 He'd play for the Celtics from 1960 to 1963, collecting 4 championship rings along the way.  Just like John Bach mentioned a few weeks back, shooting percentages really weren't cared about back then.  Look at Gene from the field and free throw line a few of those seasons!  He made Rondo look like Mark Price at the stripe (sort-of).

Apparently Gene had a Glenn McDonald-like moment during the 1962 Finals vs the Flakers.  According to Wikipedia, "in the final moments of regulation time, in the decisive seventh game, he stopped Elgin Baylor. The Celtics went on to win the game in overtime."  There's no elaboration on this.  Did he block Baylor's shot?  Did he steal the ball?  Or did he just flat-out stop him with lock-down defense?


After his playing career, Gene returned to Duryea High School to teach and coach.  Today Duryea is known as Pittston HS.


Today Gene is the leader of The Cadillacs Band,  which as you can see from their site, is a very popular cover band in Pennsylvania that covers everything from Elvis to Pink Floyd.  No word on whether him and Dontae' Jones might consider a duet of some sort, them being our two musically inclined WTHHT stars.  Gene sings and plays bass guitar.  And as you can see from their robust song list, they play it all!

***11/20/16*** Sadly Gene passed away at the age of 79.  CelticsLife wishes Gene's family the best during this tough time and thanks him for all his efforts in Boston.