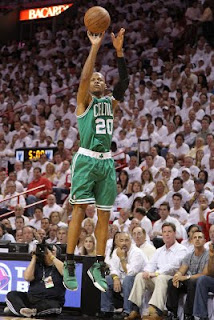 Mark Murphy of the Boston Herald caught up with Ray Allen during the unveiling of a new $30,000 computer lab at the Sarah Greenwood School in Dorchester. Ray, who's been relatively quiet since the Celtics' season ended, had a lot to say.

He talked about the Bruins' championship, how he was happy for them and how he was -- admittedly -- a bit jealous too.

“As much as I was happy for them, there was a bit of anger that I had,” said Allen. “I would pretty much imagine that as an athlete you would feel that way, because that’s something we always shoot for — reaching that height.

“I’m extremely proud of (the Bruins), for what they’ve done for the city of Boston,” he said. “When you see it from the other side you realize how much bigger it is than yourself. You see how many people are rooting for you, and sometimes when we’re on our own little path, or our own little journey, you forget the intensity of the moment. It’s always a lesson that there are people rooting for you, and no matter how egotistical we may be as athletes, or as insular as we can be, these moments playing in Boston are bigger than us as individuals.”

“When we won in ’08, each person had to reflect back on his career and what this meant to us, but being in Boston made it that much more glamorous. To do what we did, and the history of this franchise, watching the Bruins win and seeing it from the other side as a fan, it makes you realize the enormity of the situation. It does help you move forward.”

Ray went on to reflect on what kept the Celtics from having their own parade this year, and putting up their own banner. The dynamic duo of LeBron James and Dwyane Wade may have knocked Boston out of the playoffs and some (ok, many) have pointed to the Perkins trade as a crippling blow to the team, but Ray had another culprit.

“Most of the time, watching the Eastern Conference finals, we were still, in my opinion, better than most of the teams that played," he said. "We lost to Dallas twice this year, but we still liked our chances against them. It was just us playing our best basketball. A kid asked me: Who was the toughest opponent we had to face this year? And, I said it was ourselves.”

Ray also touched on coming off the bench behind Jeff Green, it's something he says he's OK with and doesn't view as a negative thing.

“It will figure itself out," Ray said. "With regards to Jeff, it’s whatever I can do to make him better. I’ll push him to play to the best he can. Guys look at it that coming off the bench is a bad thing. (Allen) Iverson didn’t want to come off the bench. But you always worry more about who finishes games. When you’re on a winning team, winning the game is the ultimate objective. I looked at our record this year, and it was sad that we didn’t get 60 wins. We should have had that based on the games we lost, and that would have given us home-court advantage through the whole playoffs.”

What an ultimate team player.