Nenad Krstic courted by the elite of Europe 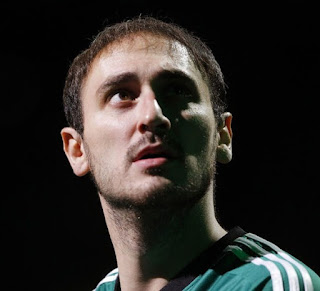 It could make a good title for a movie, somewhere along the lines of "The Center Exodus" or "Big Men Leave Town". Name it as you want and do not fear because it seems as if we may soon lose our fourth center in the last four months. After Perkins and Erden left Beantown in February and Shaq retired last week we may start get ready to wave our goodbyes to our friend Nenad Krstic. By the way, Jermaine's knees say "hi" but luckily he still relies on the rest of his body to grant us the only true center for the Celtics in 2011/12.

Center Boston Celtics and the team captain of Serbia, Nenad Krstic, has a new manager. It is a famous basketball player and former representative Serbia Zoran Savic.

Nenad Krstic played his seventh season in the NBA. He started in his first season in Oklahoma "Thunder" to the middle of the year was traded and donned the green shirt "Celtics" with whom he reached the playoffs. However, the Serbian center has not recorded a prominent role in the playoffs, and as an epilogue that he is now thinking about returning to Europe.

Zoran Savic and his management house "Invektus" will take care of frequent bids for 213 centimeter High basketball star who was born in Kraljevo in 1983. Also, there is still a possibility of lockout so it is possible that Nenad Krstic start next season meet in one of Europe's major clubs. Offers that come from Europe as part of the job that is confided Krle Savic.

Zoran Savic is quite a name in European basketball. He had a successful career as a player in Europe and that may lead to the next piece of information from yesterday's media in Serbia (again translated):

Nenad Krstic of the season in the NBA, "visited" half of Europe. They asked him CSKA Moscow, Olympiakos, Barcelona, Caja Laboral.

But he will probably be back in October in the U.S., in Boston.

The first operative "Celtic" Danny Ainge, said he wants to see our national team and Aleksandar Pavlovic back in the green jersey, which will be his priority in the transfer window.

Since Nenad and Sasha, who are free players, they want to pursue NBA career, there is still to be seen whether the agreement with Boston before an eventual lockout or after. 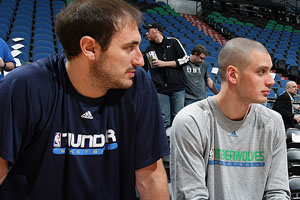 So let's see the timeline of all this. First we hear that CSKA team from Russia is interested in the services of the Serbian. Then two days later he signs for high profile manager and ex-great player Zoran Savic. Finally we hear the names of other 3 high caliber teams asking for the services of Nenad. Of course, as we know, Krstic is still technically a Celtic so he can't say anything particular on this subject. He may be saying the Celtics are his priority because he is still getting paid by Ainge.

In any case, it is the time for speculations until the new CBA agreement comes so feel free to draw your own conclusions. It seems though as it all signs indicate that Krstic wouldn't be against a move back to Europe, particularly if a lockout arrives in the next weeks. Stay tuned for more updates.