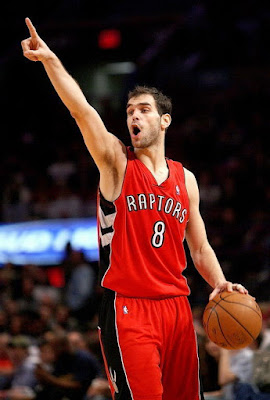 We are lacking the same thing since this all started back in 2007. The Celtics need help at the backup point guard: Someone who can shoot the ball, someone who buys into the team philosophy and doesn't become a locker room cancer. Getting minutes behind Rajon Rondo hasn't been easy for anyone. We tried with Eddie House, Sam Cassell, Gabe Pruitt, Nate Robinson, Avery Bradley, Carlos Arroyo and even Stephon Marbury. Nothing has been entirely successful so far. It's even arguable that Delonte is a natural point guard and the same goes for Avery.

Today I am going to talk about José Calderón. I believe he would be the perfect choice to play behind Rajon and occasionally play together. I will start by saying that I am not objective in this article. My mother is from the same town as José and therefore I am in a position to tell you some things that you may not know. Calderón comes from a humble family in a region in Spain which is not very noticeable by tourists. Extremadura is in the southwestern part of Spain, close to Portugal. People there are very quiet and very friendly and of course proud of their identity. As for my family, Calderón's family is a humble one. José's mother had a small grocery store in town and my grandmother used to buy there everyday. My grandma usually talks to me about Calderón's family and even that she has naturally met him many times, even after becoming an icon in Spain. Because you must know that José Calderón is one of the best PG in the history of my country. And as you may know, he has also had some success in the NBA. 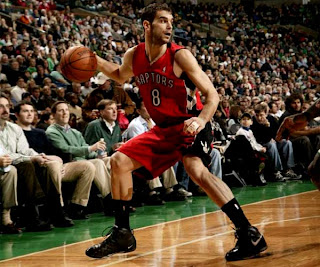 I have watched José's game evolve ever since I watched him play in the Spanish League, also known as ACB. He first played for Alicante and then moved to the north to play for current Caja Laboral Vitoria. He left town as a teenager from a region that has little chance for people to become noticeable in the national news. Little by little, José has made his own path to glory. It is quite amazing to see someone coming from such a modest environment become a legend in my country. His father was a player in a minor basketball league in Spain. When I was little I used to watch his games live at the arena when I travelled for Christmas or Easter to visit my grandmother and my cousins in Villanueva de La Serena. In Badajoz. In Spain.

I can tell you something: you won't find anyone more suitable to the ubuntu spirit than Calderón in the NBA. He is so unselfish that he has irritated some fans in the past. He has worked his shooting so much that now he may be a threat from the three point line. He worked so much that he is one of the top 5 in assists in the league every year. He is also one of the best in assists per TO ratio in the league ever since he plays in Toronto. In other words: he is a team oriented player with above average court vision that could score and assist at will with our team. His IQ is really high and he would fit instantly, plus he is one of the best free thow shooters in the league.

At almost 30 years of age and after spending some tough years in Toronto due to many changes in personnel, José would accept playing for a winner instantly. He would be the perfect teammate and the perfect backup for Rondo.

How the Celtics could get him: 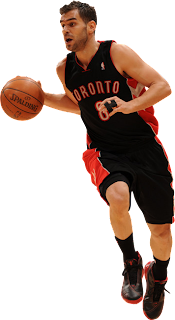 Here comes trouble: He is due close to $20 million in the next two seasons. Toronto wants to trade him because the project he was part of has ended. In fact it ended when Chris Bosh decided to join Miami's ego squad. He would welcome a change and the team needs to find new names and new references. So yes, he is on the trading block. The problem is that we would need a third team or some sign and trade with different pieces to get Calderón from the Raptors. Either that or sending Ray Allen with the promise of being cut by Toronto and getting Ray Ray back one month later. In other words, it is complicated. So far I have suggested signing players with realistic economic scenarios. This time it is not realistic. But not impossible. We have seen more surrealist things happening to our team and around the league. All I am just saying is that José would be priceless coming from the bench for us. He hasn't been too healthy later because he had too play many minutes in a very unsuccessful team. He would be great here, provided we could get him

When you star player is called Andrea Bargnani you know that defense is not the priority for your team: Calderón has been criticized for his D. While he is not the best defender, he has been part of a subpar team in that department in the league. While playing in Spain and also for the national team he has proved he can be a decent defender. With the right teammates and in the right environment he would be able to contribute in D too.

What do you think? Should the Celtics sign José Calderón?

Is there any team you would like to play for? Jose Calderon: Obviously everybody would like to play for Boston or the Lakers, because apart from being two of the best teams, everything around them is amazing. When you watch that, you're like, "How cool!" But you've got to realize that it's difficult to get a spot there.