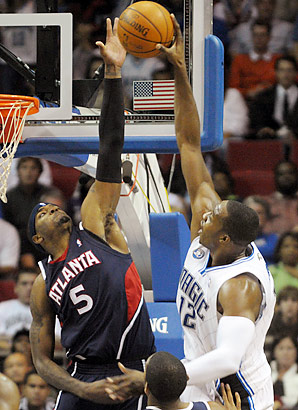 A. Sherrod Blakely puts to rest any dreams of a Rondo/Josh Smith reunion.


A league source told CSNNE.com on Monday night that the Celtics have had "no discussions whatsoever" with the Atlanta Hawks about acquiring Smith. The same source added that there were no plans to open up such dialogue any time in the near future.
"You can never say never," the source said, "but there's nothing going on there."

Blakely speculates that Ray Allen would have been the target for the Hawks and that one reason the C's wouldn't be interested in Josh Smith is because they already have Jeff Green. Mind you Josh Smith is a much better player than Jeff Green. He's a top shot blocker and actually can rebound. So if you're keeping score at home we have no center because Danny traded him for Jeff Green and we aren't getting Josh Smith because of Jeff Green.

While Josh Smith does have his flaws, just being honest here, I don't think the C's will be able to get anyone better than him. So while for sentimental reasons I understand fans would rather watch Ray and KG for one more year, not getting Smith could be a blown opportunity. What also might suck is if next year Dwight Howard is forcing a trade out of Orlando and we could have had a piece in Smith that would entice Howard to come here or could be traded to get Howard, but we don't have him, so he goes to the Lakers for Bynum. 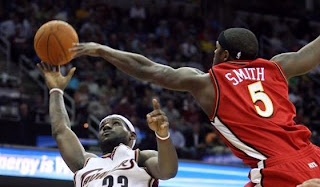 So again, while fans might prefer not to break up the team now it might be our only chance to rebuild on the fly. In my honest opinion our four year window closed the day we traded Perk. I believe if we hadn't made that trade and instead made the Semih/Battier trade we would have remained the top seed (as Doc has said as well) and we would have taken Miami out in the Eastern Conference Finals with home court advantage on our side. No way Dallas beats us in the Finals either. BUT since that team has already been broken up by Danny, no need to pussy foot around and keep the team minus a center and lose in the 2nd round again.

If you have an opportunity to trade in one year of Ray or KG for a future building block you have to go for it. Cecause I have some bad news for you if you are against moving any of the Big 3 then don't be surprised if Danny trades Rondo after the Big 3 retires and starts from scratch. So let me ask you, in order to keep Ray and KG for a year are you willing to sacrifice Rondo? I sure am not. Don't for one second think Danny is going to show some loyalty to Rajon. Danny's the guy who told Red he should have traded Bird or McHale. So be careful with what you wish for saying that Danny should under no circumstance trade KG or Ray. I actually read a comment today where someone said Danny does not have permission to trade them. Hilarious!

The 2008-2011 Ubuntu Celtics have run their course. They were broken up prematurely at the deadline. Now it's make or break time for the future of the Celtics. If you want a team with Rondo on it and you want a contender then you must be willing to part with Ray or KG for the right piece. So again are you willing to risk losing Rondo just to watch the Big 3 one more year?