These comments aren't near as much fun to gather when we lose.  I'm still not ready to give up on this team as yet.  8 teams have come back from a 3-1 deficit and 2 of those teams wore Celtic green.  Never underestimate Celtic Pride. I really don't understand how these guys can complain so much about the refs.  I can only guess that they want ALL the calls to go their way.  They aren't satisfied with just most of them.  Celtics fans don't need to bash their players.  They do a great job on all of them themselves.

- If we lose, I don't want Bosh embarrassing himself in post game interviews.

We need this game. I want them to crush the Celtics soul from openning tip.

Wade got snubbed from the All-Defensive Team and All-NBA first team... I wouldn't complain about defensive Team if both Kobe and Rondo didn't make it over him which is ridiculous. This guy is so under-appreciated.

What's even worse is that Rose got more votes than him. SMH.

I've got a good feeling about this game. I think with Riley talking to our team and the things that have been said about Wade, Wade will take this game personal and will us to a win. It's already reported that Wade is mad about the commentary given to him.

Udonis Haslem to be active tonight in place of Jamaal Magloire. First time in uniform for Haslem since November foot surgery. Bad news for the Celtics!!

Rondo will play. I am sure if he got his arm cut off he wold play. Guy is a beast. He may not be 100%, but just being quick on D is all they need from him at this point. KG, Allen and PP can pick p the scoring for him.

Someone will take a hard foul on wade tonight, our guys need to be ready

Y not rough up Rondo? I understand sportsmanship but c’mon don’t act like the man got coodies or something 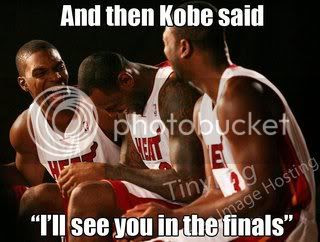 Boston is getting away with staying in the lane A LOT

Chris looks so happy when they leave him open for the jumper, like "thank GOD I don't have to do anything physical". Its disgusting.

CELTICS ARE RESORTING TO THUGGERY Good call. Cut that bull before it starts. JO is a jackass

Bring in Haslem already. **** Bosh. Package his ass with Miller for Bynum in the summer.

I want a big man that acts like a big man, but I don't want a dirty player wearing a Heat uniform.

KG is laughing at Bosh on the inside

How do the Celtics draw offensive fouls when they are clearly moving? NBA refs are the best.

And Rondo will kill us if the refs continue to buy into his theatrics. He's falling down on his own, drawing phantom fouls, and drawing moving charges . Unbelievable.

The Celtics are just fouling now without fear of the whistle. Shaq clearly fouled LBJ, thankfully, he's talented enough to finish. Talent, something the Heat have and are being penalized for.

Fat shaq is good for fouling people only.

Tony Brothers is horrible. Same dude who wouldn't call anything in our favor in Game 5 vs the Sixers.

Time to admit it .. This team looks scared right now, and the crowd isn't even into it! Celtics look awesome and hungry, in fact I'm jealous of how free and confident they look out there

Rondo tries so hard to flop its disgusting.

Rondo is such a flopper. He elbowed Chalmers twice then took a dive for the floor to get the call

The Big Hacker collects another one. What a joke. To think he was once the most-dominant player in the land.

Shut the hell up about Rondo. He can't be that hurt if he's out there taking charges and willing to fall on that arm

I seriously strongly dislike Paul Pierce. Not sure why.

For all active players since 1999 he has lead the NBA in most-punchable-face.

This game MUST be won. Beat the hell out of Rondo if you have to. This is the Playoffs

It makes me sick watching JO work us down low. Its pitiful

Green can't guard LeBron. All he can do is foul him. Refs better blow the whistle every time.

This is a disgrace, take Haslem out UD has been nothing but a failure this game so far.

Thank god we have HCA. I don't expect us to ever win in Boston.

Problem is Boston can win in Miami. This game is important.

We suck, game over. I cant watch this **** anymore, I hope Spo gets fired this offseason

Big baby is a mouth-breathing retard...

We've got plenty of time. Celtics gotta have some faults eventually.

Lebron checking himself in. Didn't even look like it was a Spo decision

Refs are DETERMINED to give this game to Boston. It's guaranteed.

Did you see garnett cheat out hard on that screen for Allen? It was beyond a moving screen.

God doesn't want us to win

I'm convinced the refs are screwing us

Garnett has 5 points and Ray Allen has 0 and we are still losing.... That's pretty disturbing...

Garnett is a DIRTY player

Someone in the Heat organization needs to make a tape compiling all of KG's bull moving screens and offensive fouls and send it in to the league office.

JJ is an idiot, get him the **** out, he does NOTHING positive. Everything he does is negative

We get a lot of dumb fouls with all the switching we do, this Boston team is not that tough, we just play them wrong

Why is the Heat struggling against an old Boston team? I don't get it. I can beat my grandpa one-on-one.

Couldn't express how badly I want someone to clock Paul Pierce. I want it to be a Bynum-like cheap shot, too. Preferably up 20.

So is Rondo getting his own comic book series or a purple heart of war? Sure sounds like it

Rondo truly is a masterful flopper, the man has made it an art.

The last 8 Celtics points have come from the refs

How is it possible that we have committed 8 more fouls than Boston?

I hate the Celtics almost as much as the lakers. The ref calls those two get are unreal.

We cannot match the will and determination of the Celtics (I mean REFS).

James makes 2 brilliant plays and 2 retarded plays in 4 plays. Don't know how I feel about him.

This team is the best at failing. They will find a way.

Let's all kill the refs if the Boston make a last-second shot!!

Pierce doesn't usually miss that shot. We bailed out on that one.

Wow Garnett is having a worse game than Bosh did on Saturday.

Omg Celtics are practically giving us the game

Those faces on the Boston bench are just great.