I've learned something these first 2 playoff games: the Celtics aren't winning the championship this season.  See I didn't really think that around mid-February.  But a certain trade killed the morale of this team.

These first two games have been utterly pathetic.  There was a point in the 3rd quarter last night where Carmelo Anthony was on the floor with Bill Walker, Ronny Turiaf, Tony Douglas and Landry Fields.  I'll repeat that cast for you: Walker, Turiaf, Douglas and Fields.  No Stoudemire.  No Billups.  Roger Mason Jr and Jarred Jeffries would  then check in the game as subs.   Same with Anthony Carter.  And the Knicks were hanging around.

The Celtics should've had a 20 point lead, instead they were being played evenly.  In the biggest stage of the season, the switch hadn't been flipped yet.

4th quarter, Carmelo still continued to play 1 on 5.  And it didn't matter.  Because the Knicks would actually take the lead.  Remember Carmelo Anthony's not Michael Jordan.  He's not even LeBron James or Bean.  Where was the Celtics defense to collapse on him?  With no Stoudemire or Billups it should've been easy.  Really easy.  But it was a struggle.  A huge struggle. 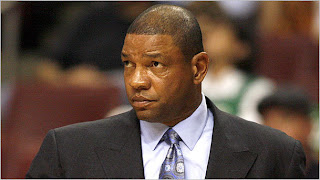 It's blatant to me this team's mojo is gone.  The playoffs have started and the flip hasn't switched.  They don't get the consecutive stops they need to push out the lead.  After these first 2 games, I'm now expecting this series to go the full 7 games.  Before it started I picked the Celtics in 5.

I have little confidence in Jermaine O'Neal or Shaq both being able to contribute for the rest of the playoffs.  I have no confidence in Krstic, Davis or Green coming up with a big rebound.  They get pounded on the glass.  If the Celtics can't get big stops against a team with one offensive threat, how far can they really go?

If the Celtics want to prove me that these two games were an aberration, they'll come out and put a whooping  on NY this Friday at MSG.  Unfortunately I don't see that happening.

No one's a bigger Celtics fan than me.  But I've seen enough of these new Celtics to realize this season's not ending with Banner 18.  Not unless something changes dramatically.