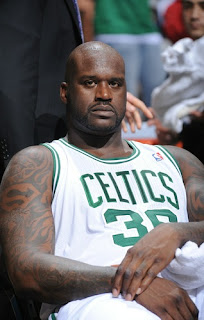 Now it's to the point where the Celtics have no idea when the 7-foot-1 center who turned 39 years old today, will return to action.

When asked about O'Neal and a likely return date, Celtics head coach Doc Rivers acknowledged he had no idea.

"He (O'Neal) worked out with us the other day," Rivers said. "Some of the pain returned."

Just one ailment after another with these O'Neals. All you "Danny was a genius to trade Perk. Green is Len Bias reincarnated" Ainge fan boys might be singing a different tune if we get bounced from the playoffs due to getting beat down low. Can you really guarantee the O'Neal brothers will be ready to go? I mean I like Kristic and Green. They're solid role players, but the idea that we don't need Perk, because we can count on Shaq is laughable in my honest opinion.