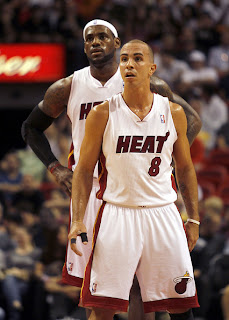 The Celtics, in their search for a backup point guard while Delonte West recovers from a sprained ankle, have come to terms with Carlos Arroyo on a pro-rated veteran’s minimum contract for the rest of the season, according to a league source.

Arroyo, pending a physical, may join the team tomorrow in Milwaukee.

Arroyo had been waived by Miami earlier this week to make way for the team’s signing of Mike Bibby, and was one of two veteran playmakers the Celtics were looking at. The other was thought to be Antonio Daniels, the long-time veteran who is attempting a comeback with the Texas Legends of the NBDL.

The make room for Arroyo, the Celtics informed backup center Chris Johnson following today’s practice that his contract was not being renewed.

This move makes a lot of sense. Arroyo isn't that great, but I don't think you can go into the playoffs with only oft-injured Delonte West and rookie Avery Bradley as the only backups at the point. What happens if Rondo has to miss a game? You need some insurance.

On a side note, the Celtics have definitely become more International in the past ten days, which is kind of cool considering the huge amount of international readers Celtics Life has.