What the Hell Happened to...Rick Weitzman?

Today in WTHHT we go back as far as we have, to the 1960s, when we remember Rick Weitzman.  Rick was picked by the Celtics in the 10th round of the 1967 draft out of Northeastern University.  He wasn't supposed to make the team but he did.  After putting on a performance that even surprised himself, Rick found himself still standing the day before the regular season began.  With cuts still to be made, coach Bill Russell had the four rookies play a game of two on two including Weitzman, Mal Graham, Johnny Jones and Neville Shed.  Rick claimed it was "the most physical, competitive, emotionally draining two-on-two contest" he'd ever seen.  Rick wound up making the team. 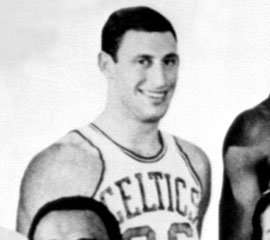 He'd only last one season, the 1968 campaign where he played in 25 games.  But the Celtics would win the title and Rick actually made the game's final basket in the final game against the Flakers.  Knee injuries would end his career the following season and he'd go on to teach English at Peabody High School for 13 years (sounds like a profession that originally intrigued Hank Finkel).

Rick had been neighbors with Johnny Most and in 1980 was hired by the Celtics to do color commentating for the radio broadcasts.  He did that for 2 years and by 1984, was a full-time scout for the Celtics.  By 1987, he had been promoted to head scout.  Rick's proudest draft picks were Reggie Lewis and Rick Fox.

I suspected I'd lose my job.  New bosses always bring in their own guys.  What bothered me was that the [Evil Emperor] didn't have the courtesy to tell me face to face that I was being let go.  Instead, I received a phone call from Rich Pond, the [Evil Emperor's} right-hand man, telling me I was dismissed.  The [Evil Emperor] didn't even have the class to call me himself.  I had done a lot of draft preparation work.  I figured, at the very least, he might want to pick my brain about my thoughts on the draft..... but I guess he figured he knew all the answers. 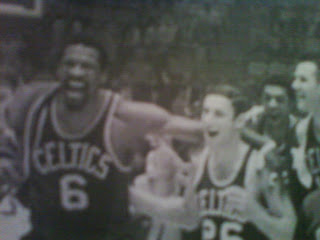 [What's funny is how little the Evil Emperor knew.  Along with his trusty buffoon, he'd go on to ruin the Celtics, setting them back for years to come.  His reign in Boston was the lowlight of the Celtics' storied franchise and is why I never mention him by his name.]

But Weitzman would persevere through the classless Emperor.  Cavs' General Manager Wayne Embry sucked him up to be the Cleveland scout where he remained until Wayne was let go.  He'd go on to do color commentating on ESPN for its international game of the week while also serving as part-time scout to Marty Blake. Most recently, Rick has done NBDL scouting for the Charlotte Bobcats.  He is also affiliated with One World Games (OWG), " a youth sports program that combines training, competition, and cultural experience."

He lives in the Boston area with his wife Carol.