Pierce shows why he's the captain 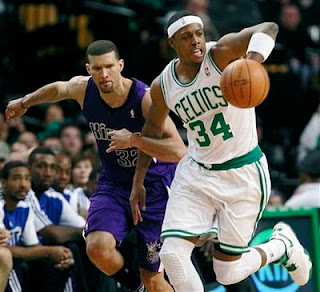 The Celtics' loss to a short-handed Houston Rockets team Monday night was possibly the lowest the team has dipped all season. The loss had the Celtics falling to 5-5 in their last 10 games and memories of last year's post-holiday .500 run came flooding back into the minds of Boston sports fans.

"I thought [in the Rockets game] Paul -– the whole team, really -- we were not a hard-cutting team," said coach Doc Rivers Wednesday night. "We didn’t do anything hard."

"It has to come from everybody," said captain Paul Pierce prior to Wednesday's game. "They have to look at themselves and ask, 'Are we giving enough as a team?'"

A 119-95 rout of the Sacramento Kings later, one could say the Celtics responded. Especially Pierce.

Boston got a high amount of energy from all of their players -- especially Semih Erden and Luke Harangody. However, it was Pierce who got things started for the club, ending the night with 25 points, 4 steals, 6 rebounds and 3 assists.

15 of those points came in the first quarter, before the game had turned lopsided. It was a quarter that starred  Pierce.

Boston began the game by pulling away from the Kings and Pierce had a hand in the first two scores -- assisting Ray Allen's layup for the first points of the game then catching a pass from Rondo and drilling a three to bring Boston up 5-0. The Celtics soon climbed to a 10-2 lead but the Kings weren't ready to give up this early, rallying back to tie the game, 12-12, with 5:07 left in the quarter. 20 seconds later Pierce attacked the basket, laying in a shot to break the tie. It was the captain's 7th point of the game to that point, half of Boston's point total.

From that point on, Pierce did not stay off the scoreboard in the opening frame, scoring 9 of the Celtics' next 15 points to end the quarter clinging to a 28-22 lead.

It's Pierce's job as a captain to step up in moments like this and Wednesday's game, especially that first quarter, was an example of a time he did just that. The Celtics do not want to coast through the second half of the regular season again. When it seemed the Celtics were losing control of the game in that first quarter, it was the captain that stepped up and made sure it wasn't going to happen again. Where he led, his team followed, capping off the night with a 24 point victory.

"It’s huge," said Rivers of Pierce's performance. "Paul knew last game that none of us, as a group, came with the right mental approach. That’s what leaders have to do, and that’s what he did."