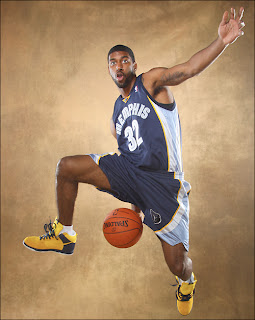 Memphis Grizzlies guard O.J. Mayo has been suspended without pay for 10 games for violating the NBA's anti-drug policy, the league announced Thursday.

The league said Mayo tested positive for dehydroepiandrosterone, which is a steroid precursor known as DHEA.

Of course Mayo is going with the standard "over-the-counter supplement honest mistake" excuse. Yes O.J, and you didn't get any money from anyone at USC either. No truth to the rumor the supplement came from T.A's fists when he jammed them down Mayo's throat a few weeks ago.