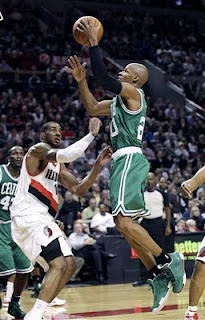 Ray Allen scored 18 points on 3/6 shooting from beyond the arch as Boston beat the Portland Trail Blazers, 88-78.

Despite turning the ball over 21 times and being out-rebounded, 49-42; including a 19-8 disparity on the offensive end, the Celtics were able to start their west coast road trip with a win. The Blazers turned the ball over 17 times themselves and were held to 36.7 percent shooting. Portland also made 20 fewer trips to the charity stripe than the visiting Celtics, going nearly the entire first half without a free throw attempt.

Paul Pierce left the game in the fourth quarter with what's being reported as a bruised right thigh but notched 17 points on 50 percent shooting. 14 of those points came in the first half.

Garnett had a near triple double with 10 points, nine rebounds and nine assists. In his second game back from injury, Kendrick Perkins came close to a double double, scoring 10 points and reeling in nine boards in just over 20 minutes off the bench. Rajon Rondo added 11 points and a season-low five assists.

LaMarcus Aldridge led all Portland scorers with a double double of 17 points and 16 rebounds making eight of a game-high 20 attempts. Andre Miller scored 14 while Wesley Matthews added 12 points with 7 assists.

Early in the first quarter, it looked like Boston may start to pull away after Kevin Garnett drained a turnaround bank shot to give the Celtics a 9-4 lead. However, the Blazers -- helped by a Semih Erden turnover -- responded by scoring four points in the next 17 seconds to cut the C's lead to one. It turned out to be the story for the night.


11 first half turnovers by Boston aided the Portland Trail Blazers who were also beating the C's on the glass, reeling in 12 offensive rebounds in the opening half. Portland took advantage of a sloppy Celtics team, taking a lead as high as five amidst a 14-4 run to begin the second quarter. However, behind eight points from Paul Pierce in the final five minutes of the half, Boston was able to rally back to head to halftime holding onto a four point lead, 41-37.

Turnovers continued to be the story for Boston coming out of halftime. Yet, assisted by some poor shooting by the Blazers -- who missed six shots in the first seven minutes of the quarter -- the Celtics were able to hang onto their lead. Eventually, Boston pulled away. Nine quick points from Ray Allen -- including two back-to-back threes -- and a Perkins dunk gave the C's their first double digit lead of the night, 10.

In the fourth, Boston built on their momentum from the third quarter, going on a 10-2 run to open the final frame -- climbing to a 14 point lead and led by as many as 15. However, Portland rallied back. After making only 1-of-11 shots from beyond the arch all night, the Blazers drilled three straight (two from Matthews, one from Fernandez) amidst a 14-2 run to cut Boston's double digit lead to five with just 48 seconds to go. However, it wasn't enough as the Blazers scored only one point over the final stretch. A Garnett rebound off of a Marquis Daniels missed free throw and six makes at the charity stripe by Davis, Garnett and Nate Robinson sealed the game for Boston, 78-88.

The Celtics improve to 35-10 on the season and next play tomorrow night in Phoenix at 10:30pm EST.