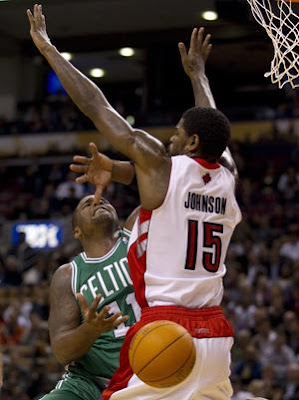 It came down to the wire and when things got really hot, the Celtics couldn't respond. Despite leading by eight points after the first quarter, the Celtics couldn't hang on to the lead and let Toronto back in the game, while committing lots of personal fouls and making bad decisions offensively.

A 10-0 fourth quarter run got them back in the game but, in the end, Toronto held on to the lead. Paul Pierce had a chance to win the game for Boston with 2.7 seconds on the game clock but his mid-range jumper rattled in and out as the final buzzer sounded. The Celtics were clearly missing Rajon Rondo (who sat out the game with a hamstring injury) as the offense did not seem to flow the way it usually does with Rondo distributing the rock.

Not even a big game from Nate Robinson, who started in place of Rondo and scored 22 points to lead the C's, could prevent an ugly loss. Toronto just seemed to want it more and in the end, they probably deserved it more, too. Paul Pierce added 19 points for Boston, while Andrea Bargnani lead the Raptors with 29 points and Amir Johnson added 17 (while going 9-9 from the FT line) off the bench.