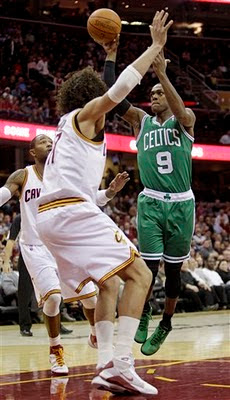 Rajon Rondo scored 23 points and dished out 12 assists as the Celtics defeated the Cavaliers, 106-86.

After letting a double digit lead slip away in the first meeting of the two teams on October 27th, the Celtics learned their lesson and this time took care of business against the inferior Cavs.

Rondo's aggression in the first quarter helped the C's overcome a early deficit and take a first half lead which they never gave up. Rondo posted a season high 23 points on a team-high 17 shots, his last season high was in the last game against Cleveland, in which he scored 18 pts. Tonight was Rondo's 8th double double of the season.

Rondo was one of six Celtics in double figures. Marquis Daniels and Glen Davis were the stars of the bench. Marquis scored 16 (another season high) and Baby added 17. KG had a double double with 11 points and 10 rebounds. Ray Allen added 12 points and Paul Pierce scored 11.

Cleveland's JJ Hickson - who had a lot of success against Boston the first time the teams met - remained scoreless until 1:10 left in the 4th quarter when he made a free throw. Anderson Varejao led Cleveland with 16 points and 12 rebounds.

The Cavaliers were able cut an 11 point Celtics lead to 9 in the third quarter. However, Boston never let off the gas pedal. Behind 3 blocked shots they were able to end the quarter with a 15 point lead. The Cavs were never able to come close in the fourth as the C's wrapped things up, 106-87.

Despite ending well, Boston struggled out of the gate. They looked sloppy to start the first quarter and eventually fell behind by as many as 9 points in the first quarter. However, Rondo took matters into his own hands. Aggressively attacking the basket, Rondo finished the 1st quarter with 11 points on 9 shots, aiding the team to pull within 2. With the final seconds ticking away, Rondo was able to draw a foul from Daniel Gibson on a desperation heave from beyond half court. However, he was only able to connect on 1 of the 3 free throws.

In the second quarter, the bench picked up where Rondo left off as the Celtics were able to take the lead with a Nate Robinson 3 pointer a little over four minutes in. From there on the C's didn't let up - silencing the crowd while climbing to as much as a 14 point lead and ending the first half on top, 56-45.

The Celtics improve to 13-4 and prepare for a back to back game against the Portland Trail Blazers tomorrow night at the TD Garden.