Perkins: “Welker was my Motivation”

I always enjoy stories of players from different Boston teams getting together.

I loved hearing about how Terry Francona and Big Papi of the Red Sox root unabashedly for the Celtics. Papi even has Boston fan like superstitions about it (if they lose the games he goes to in the regular season he doesn’t go to the playoff games).

I like that Bill Belichick invited Doc Rivers to speak to the Patriots last year and sought out the coach’s input on drafting Brandon Spikes, who’s dating Rivers’ daughter.

However, perhaps no inter-sport connection is more meaningful than the one Peter May described in a piece for ESPNBoston.com. That is, Patriots’ wide receiver Wes Welker and Celtics’ center, Kendrick Perkins.

The tie that bonds them of course is their injuries.


Wes Welker tore his ACL four months before Perkins did. The non-contact injury came on Welker’s first catch of the final game of the Week 17 season – a game that was meaningless since the Pats had clinched the AFC East title and a playoff berth.

Former Patriot, Rodney Harrison (who tore his ACL in 2005) predicted that Welker wouldn’t be back on the field until November of 2010 – and that he wouldn’t look like himself until the following season.

Of course, that wasn’t the case. To everyone’s surprise – Welker was participating in training camp in July and taking hits in the pre-season in August. Sure enough, he suited up for Game 1 of the season and looked like the Welker of old – catching 8 passes for 64 yards and 2 touchdowns.

This wasn’t the norm. Far from it.

Welker accomplished what many thought was literally impossible. It’s almost hard to believe. His display of dedication and sheer toughness is not only surprising but impressive and – most importantly - inspiring.

Especially to the Celtics’ Kendrick Perkins. Peter May writes: 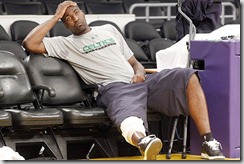 “My motivation was Wes Welker,'' Perkins said. "Watching him come back after six months and now he's on the field, without a brace. That's unbelievable. I watch him. But at the same time, you also have to listen to your own body. I feel great. But I still use him as motivation. I come in, put in my rehab and think of him. I do more when they ask me to do more."

Welker can often be spotted in the crowd at the TD Garden. May writes that recently, Perkins and Welker met at a game and the Patriots wide receiver offered his best advice:

“He's kind of getting to the stage where he can do some things, move around, but it's one of those deals that you have to stay after it,'' Welker said of Perkins. "Even the days you don't want to work on it, those are the most important days to make sure you are working on it. There were a lot of days where I woke up and it was like, 'No way!' I won't be able to do anything. But you warm it up and then you're able to get a good day's work in, where a lot of times people take that day off."

The hard work and dedication have seem to have paid off. May writes that Perkins walks without a brace and “to the untrained eye” looks like he could step in at any moment. Perkins’ doctor Brian McKeon recognizes the strong improvement:

Perkins hopes to be back playing 6 months after his July 15th surgery - just like Welker. And if the results are the same, Perk should look just like his old self.