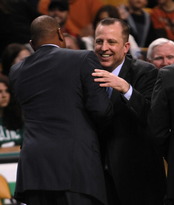 This was a great game. The skeptics will say that the Celtics should have won by double digits. The realists understand that in the NBA everyone makes a run and the way you close out a game is more important than how you play the rest of the game. The Celtics were able to make some big plays to win tonight and that should make everyone excited.  Ray Allen was the star for the Celtics with 25 points including a clutch 3 in crunch time. Win or lose this year I am happy to have watched this guy for the last 3 years. I was also happy to see the treatment the Boston crowd gave Scalabrine and Thibodeau. Who says Boston fans are jerks?

Pierce had a terrible night shooting but still made an impact. Garnett made the play of the game with a steal from Noah with under a minute remaining. What the hell was that guy thinking? Rondo had an average game with 10 points and 11 assists but we are still so lucky we got him for the price we did 2 years ago. If we had waited a year he would've been signed for at least 30 million more. Danny Ainge is awesome at life.

This Bulls team is pretty decent and with Boozer back could be the 4th team to contend for the Eastern Conference title. Derrick Rose is the real deal and Luol Deng hit some huge shots for them down the stretch finishing with 20 points. Joakim Noah is really ugly but pretty damn good at the game of basketball. 26 and 12 is solid.

Marquis Daniels had a solid showing with 13 points and Big Baby continued to make his case for 6th man of the year with 15 points and 18 charges( or it seemed like it). Great win by the Celtics. I feel really good about this team.