You will miss Scal 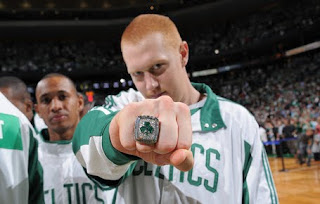 It looks like Scalabrine might not be a Celtic for too much longer and this makes me very sad. Am I biased? Of course I am. I'm a redhead and any redhead will tell you that it's a brotherhood. Scal is one of  the only true red heads in the league and is on my favorite sports team. I love the dude.  But I digress...

The only reason people hate on Scalabrine, besides the fact that sports fans love to hate stuff, is because he was signed to a big contract and isn't that great(by NBA standards). I'm sorry, if you were offered more money than you were worth you wouldn't take it? Shush.  By the way, I hate when people say players suck when anyone in the NBA is ridiculously good at basketball.  Most of those "haters" probably couldn't make a 10 foot jump shot if their lives depended on it.

The fact is he gets everything out of his talents. Basketball isn't just about who can score the most or pass the best. It's a team game and you need locker room guys. That is generic to say but absolutely true. Look, we all want to win championships, but the fact is sports are supposed to be entertainment as well. What is more entertaining than Scalabrine doing the crip walk on the sidelines? What is more entertaining than his news conferences? Three Toes rants maybe, but not much else.

I hope Scal comes back in some role to the Celtics. I'd love to see him replace Donny Marshall in the booth. The guy is downright hilarious and loves the Celtics. Plus, he's smart, loves Boston, and he'd be a breath of fresh air.  Not to mention he could teach people like me a few dance moves. Scal is the man. If you don't like Scal you probably don't like a lot of things in life and should probably start working on being a happier person. Brian Scalabrine is a Celtics legend.