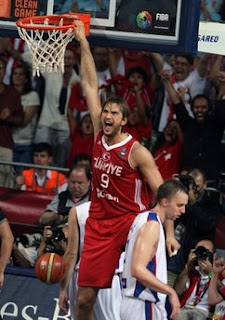 Celtics rookie Semih Erden came up big down the stretch for his Turkish team in their 83-82 semifinal win over Serbia.   In a game that Serbia led and seemed to control through three quarters, it was Turkey who came up with the big plays in the 4th quarter, and Celtic Semih Erden was a big part of several of those big plays.

It was a very exciting end of the game as the lead went back and forth and both teams made big plays.  Serbia was up 79-80 with with only 28.4 seconds to go.  Turkey inbounded the ball and Tuncieri ran inside of Serbia's three point line where he saw Semih Erden cutting to the basket. He threw an alley-oop pass to Erden who flushed it through with a monster dunk, followed by a primal scream that even KG would have been proud of.   Erden was also fouled, but missed the free throw, putting Turkey up by
just one point at 81-80 with 16.8 seconds left.

Serbia then got the ball to Velijkovic who put the it in off the glass with 4.3 seconds to go.  The free throw that Erden missed could easily have made him the goat in this game if Turkey had lost because they were now down by a point.  Turkey then called a timeout, and moved the ball to mid-court. Turkoglu got the ball towards the corner of the court. He was covered and didn't have a shot. But,  Tunceri was able to get free and cut to the basket because of a screen by Semih Erden.   Tunceri made the layup, making him an instant folk hero in Turkey, and putting them up by 1 to seemingly win the game.

But, it wasn't over yet.  The referees determined that there was still .5 seconds left. 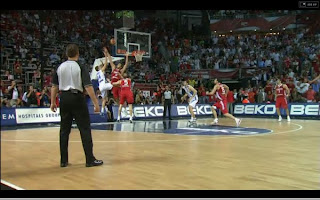 Turkey had to call off their celebration and get back to work.  It was Serbia's turn to call a timeout and they still had 1 last chance to win the game. They inbounded it from half court. Teodosic was unguarded on the inbound, with Turkey instead opting to have all 5 of their players inside the arc. He threw a long ball to Velijkovic, who was falling away from the far side of the hoop on the baseline. His shot looked good until it was blocked by none other than Celtics rookie Semih Erden, to preserve the win.

There was an interesting incident during the game involving Chicago Bulls rookie Omar Asik.  The announcers had mentioned Asik's poor free throw shooting several times and talked about how this could affect a close game down the stretch.  Right after mentioning this, Asik was fouled and at first seemed to be fine but somehow ended up on the floor holding his eye and being told to stay down.  Instead of shooting the free throws, he was taken out of the game and Arslan came in and shot the free throws for him.  The announcers mentioned how after he was taken out, his eye didn't seem to be bothering him any more.

Erden finished the game with 9 points on 3-4 shooting, 3 assists, 2 rebounds, and the game saving block in 21 minutes of play.  But, there is no denying that he came up with two of the biggest plays of the game, and set the screen to allow the winning basket.   Turkey will play team USA on Sunday at 2:00 PM ET, televised on ESPN and streamed on ESPN3.  I'll be rooting for the USA to win but will also be cheering on the only Celtic in the game.  If you missed the game, here is a video of Erden's heroics and the very exciting end of this game.