What the Hell Happened to...Kevin Gamble? 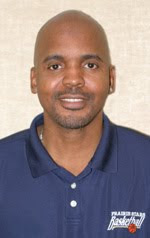 Today in WTHHT we remember #34 before Paul Pierce (and no I don't mean this guy or this guy), Kevin Gamble.

Kevin was picked in the 3rd round of the 1987 draft by the Portland Trailblazers out of the University of Iowa (where he was a teammate of BJ Armstrong).  After just 9 games with the Blazers during the 1988 season, he'd move on to the CBA, where he played for the Quad City Thunder.  After heading to the Philippines to play for a month for Anejo Rum (where he averaged almost 50 ppg- yes Gamble was the Wilt Chamberlain of the Philippines in 1988!) , he came back to Quad City and averaged almost 30 ppg.  It was during this stretch he began turning heads.  The Celtics' Larry Bird was injured and they signed Gamble.

Gamble would play sparingly in 1989 but for the 1990 season actually appeared in 71 games.  It was during the following season he'd catch his break.  With the Celtics looking for a sense of direction with Jimmy Rodgers canned and Chris Ford at the helm, Ford made a bold move, inserting Gamble into the Celtics' starting lineup, after they began just 4-2.  23 games later with Gamble starting each game and the Celtics were 29-5, and talks of 70 wins were alive.

That Celtics team was so much fun to watch.  I had a caricature t-shirt of Gamble, Brian Shaw, Reggie Lewis and Dee Brown called "Zip Boys."  It was those 4, when blended with the Big 3 (and don't forget Ed Pinckney or Derek Smith who both helped a lot that year) that gave the Celtics a formula for success.  "Something old, something new."  I still think if they had beaten Detroit that year they could've knocked that Bulls team out.  Boston was the most talented team in my opinion in the league that season.

So since he was on the team in 1991 and that was the season I kept my scrapbook, I felt obligated to share my old pictures of him from that year. 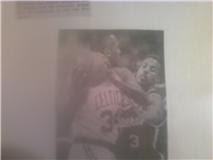 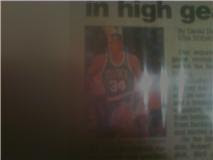 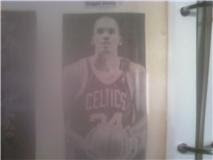 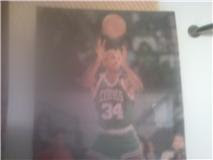 Gamble would stick with the Celts through the 1994 season, starting most of 1992 and 1993 as well.  Gamble would go on to play for the Heat and Kings after leaving Boston and after 1997, his career was over.  Gamble averaged 9.5 points with a 50.2% shooting percentage, with a 36% three point percentage and making 81% of free throws.  Over 50% from the field and 80% from the line is very impressive. He was #34 for me.  In fact it probably took Paul Pierce's performance in the 2002 Playoffs for him to supplant Gamble as the Celtics' #34.  Gamble was flat-out nasty in 1991.  Scoring on the fastbreak, with a deadly 17-19 foot jump shot, he fit in perfectly with that group of players.  If you never got to see him play (at least in the regular season) specifically in those 1991-1992 seasons), you missed a thing of beauty.  His 58% FG% in 1991 was remarkable for a guy his size, who took a good number of perimeter jumpers as well.  He didn't fair quite as well in the postseason (sort of like Eddie House) since the playoffs is all about matchups.  He wasn't the strongest defensive player and at just 6'5, he'd struggle with the bigger and stronger small forwards he'd have to defend.

A couple interesting things about him.  When he got his first start with the Celtics he remembered getting ready to run out there when they were announcing the guards, only to find out he was technically the small forward (at 6'5).  He was undersized at that position but he wasn't as good a ball-handler as Reggie Lewis was.  He also garnered the nickname "Oscar" from this teammates after baseball player Oscar Gamble.  Oscar Gamble had an afro that would make Artis Gilmore proud. 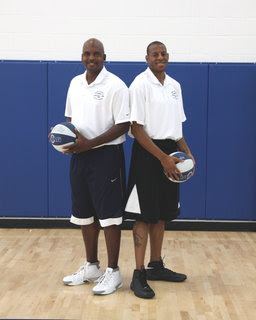 Since 2002, Kevin's been the head coach of the University of Illinois at Springfield.  He was their first head coach in school history.  But as of June 28, 2010, Gamble has officially moved on to Providence College of the Big East, where he was named Coordinator of Player Development and Video Operations.  He also runs a basketball camp with the 76ers Andre Iguodala.  This camp is called the Andre Iguodala / Kevin Gamble Basketball Camp.  [Based on this picture, I have my doubts about Andre being 6'7.  Even these guys who are listed taller today don't measure up with guys who were shorter back in the day.  Do I need to reference this article yet again?]