Perkins is not scared of the Heat 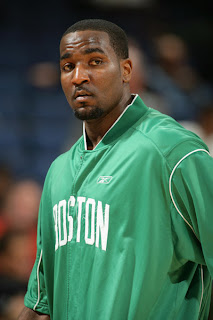 Our main man Kendrick Perkins checked in from Houston today (Yes I'm saying that using my Ahmad Rashad voice) and you can add him to the list of Celtics not ready to concede the Eastern Conference title to the Three AmEGOs down in Miami.

On how tough it will be to play against the Heat this year with their improvements:

“It’s not hard. I think we proved that this year. It’s not important where you finish in the regular season in my opinion. If you got a team that has just one goal, the goal is getting into the playoffs. Last year we finished the year at 17 and 17. That wasn’t even above .500. That was right at .500 record. A lot of people were counting us out but we knew what we were waiting on. We were just waiting to get to the playoffs. When you get to the playoffs, it’s a totally different game. It’s not more fast paced, it’s all slowed up, it’s more of a half court set, and it’s more physical. It looks good on paper with Miami and stuff like that, but at the same time each team is going to come at you. You gotta be prepared. It would be nothing more than amazing for us to meet up with Miami and beat them. I think any team would love to upset them. They’ve got a lot of pressure on their end. Forget the other teams have to play against them, they’ve got a lot of pressure on their end to win, to actually produce. It won’t just be as if you’re gonna get three All Star players and then you win a championship. You gotta have the right coach, everybody has to sacrifice, you gotta be willing to move the ball, it’s gotta be about team, and you gotta be able to play defense. We’ll see when it’s time to match-up so we can just go from there.”

Listen to the full KILT in Houston with Marc and John interview here.  You can also check out more Kendrick quotes here.