Marquis Daniels to Re-sign with Celtics 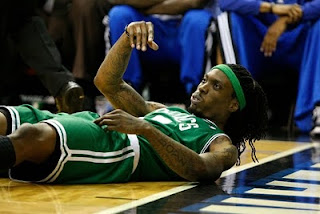 
Marquis Daniels, hoping for a fresh restart with the Celtics [team stats] after an injury-plagued 2009-10 season, just agreed to terms with his old team on his second straight one-year contract - this time a $2.5 million deal.

Daniels' return is more a reflection of what's left on the free-agent market than his performance in Boston last year. Marquis started the season strong but after a torn ligament in his left thumb he was never the same. Marquis has a reputation as someone who's injury prone as he's missed 30% of the games he could appear in. The Celtics saw evidence of that last year as the swing man ended up appearing in the second lowest total games of his career (51), averaging 5.6 pts and 1.3 assists.

However, with the departure of Tony Allen and the weak class of free-agent wings that will play for the veteran minimum, Marquis Daniels made the most sense. The Celtics could actually offer Daniels more than any other team due to the "Non-Bird Rights" they hold with him, which allowed them to bring him back for up to 120% of last year's salary - which explains his raise.