We should all know who Kevin Garnett is

"They see you hurt, they see you get dunked on, they think your guard is down. That’s when I take the clips off my guns." KG 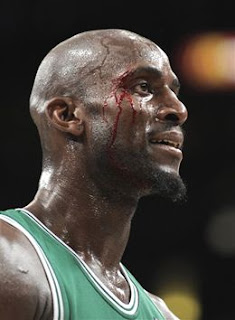 It is so funny to see how quickly people forget. Sports fans promptly shift moods and erase the most immediate memories from their heads. It is as if players should prove themselves every night to remind us of who they are. Some fans are like characters from the Memento movie, constantly marking things on their bodies and using their polaroids to avoid forgetting about past actions from our heroes. They all make use of youtube vids, quotations from past years and diverse articles from the web.

On a day like this, after the brutal deception of a loss against the Los Angeles Lakers, I witness once more the multiple acts of disbelief spread all over the web. Everyone thinks Kevin Garnett is old and washed up. Some people want even to start Wallace over him (showing my point of capricious change of opinion from some fans) and label the future Hall of Famer as soft.

I have decided I will not use any proof to talk about the power of Kevin Garnett, I will study no ink tattooed on my body to remind me of who are we talking about. I will not talk about 2008, I won't talk about MVP awards, I won't mention All Star selections or highlight dunks from the web. I have no doubts with who Kevin Garnett is. I know who he is. And more importantly I know what he will do on game 2 of the Finals.

On Game 2 of the 2010 NBA Finals Kevin Garnett will prove once more why he is one of the best forwards in the history of the game, and he'll show how ridiculous and groundless are the assumptions of his demise. He will make a fool of all those anonymous or house made threads that declare him dead. He will dominate and deliver as he's always done.

I don't forget who Kevin Garnett is and I will surely not forget what will happen tomorrow. KG is the identity of this team and the Boston Celtics will get a victory at the Staples Center on game 2. Clear and sure as Kevin Garnett's basketball DNA.

“I like it, though, these people saying this stuff, they don’t know [expletive] about me."