The Celtics toughest test yet 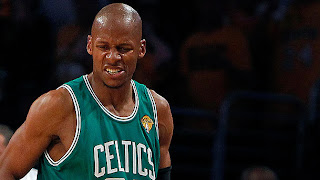 What did you expect people? Did you expect the Celtics to just walk into L.A and get a win? Unfortunately it looks like the Celtics expected that. This isn't Cleveland or the Magic or any other team the Celtics have faced. This team has two legitimate All NBA players and the Celtics need to realize that or this series will be over quickly.

Let's not panic here. The Celtics showed they can come back from adversity in Game 4 of the Cleveland series and Game 6 of the Magic series. No one with any sense could have thought that Boston would come into L.A and win two. You hope for that, but the reality is it's just not going to happen. The goal for any road team is to split and I still think Boston can do that if they come out with more energy.

Where was the fire that we had seen all playoffs? This looked like the Celtics from the regular season. There was no hustling for loose balls or boxing out. There were errant passes, missed free throws, and just a general apathy from a team that had been on fire for the last month and a half. Was this an aberration or a sign that Boston has burnt out. Hopefully it's the former.

I can honestly say that I almost want the Lakers to lose more than the Celtics to win simply because I dread the month long love fest ESPN and the rest of the networks will have with Kobe Bryant. The reality is Pau Gasol is just as, if not more important than Kobe in this series. If we don't figure him out we're going to lose in 5. I really think it would take Gasol to average 40 a game and Kobe to average 4  for anyone but Kobe to win the MVP if the Lakers win.

Again, it's just one game. As bad as the Celtics played they were still within striking distance for awhile. Ray's not going to get in foul trouble like that again. KG will hit more shots. The Celtics as a team will cut down on turnovers, and the Celtics will come in a different team Sunday night.

Let's also try a different approach as fans. Instead of criticizing our team and being nervous about Sunday night, let's go in relaxed and hoping for the best. Let's enjoy watching our favorite team play the game we love. Just remember that at the end of the day sports are entertainment and not meant to get us down. Your lives will go on no matter what the result . However, I will admit life would be better seeing Kobe walking off in defeat a couple weeks from now.  Beat L.A.