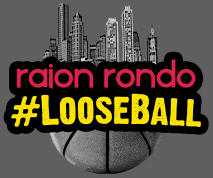 As you may have seen by now, Rajon recently joined Twitter (@RajonRondo - http://twitter.com/RajonRondo) to launch a fan campaign called "#LooseBall" in honor of his hustle and hard-nosed play throughout this year's Playoffs including the dive against Orlando.  Red Bull, one of Rondo’s sponsors, will be providing the contest prizes, which includes autographed prizes (9 basketballs and 9 shirts) in honor of the Celtic’s run for a record 18th NBA Title as well as a pair of tickets to Game 4 of the 2010 NBA Finals in Boston for one lucky winner. 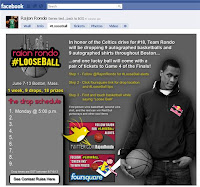 All fans in Boston are open to participate in the scavenger hunt for the nine autographed loose balls and nine autographed shirts. Prizes will be dropped between Games 3 and 5 (Monday, June 7 - Sunday, June 13) and all fans need to do is follow Rondo's Twitter for details on where the prizes are hidden although there will be a bunch of cool extra giveaways and tips on Rondo's Foursquare account (http://foursquare.com/user/rajonrondo).
For details on the contest, fans can go to Rajon's Facebook Page (http://facebook.com/rajonrondo?v=app_4949752878) and check the #LooseBall tab.

First drop is today at 5PM