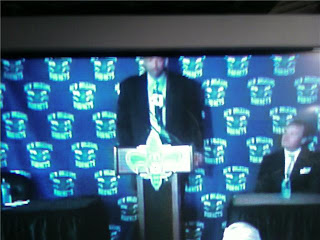 Anyone see the press conference on NBA TV the other day with Monty Williams being announced as the head coach?  This was a still shot from the video.  That's right his head was cut off  for the entire thing (that's the top of my TV above his head).  It looked like something Sportschannel New York would've put together in 1992.  How do the people videoing this not notice that is beyond me........Speaking of NBA TV, the post game show with Matt Winer, Kenny Smith and Charles Barkley was extremely uncomfortable after Game 4.  Barkley asking Winer if he's ever been "to the hood."  Other people besides Charles wouldn't get away with that.......I know many people like Barkley because he's entertaining; but he doesn't know anything about basketball.  Besides the countless predictions he's been incorrect on in this year's playoffs, before Game 4, he was raving about how the Flakers have Lamar Scrotum at their disposal and how he'd start for 98% of the teams in the NBA.  After the game he mentions how Lamar is "too inconsistent" to rely upon and how the Flakers bench is really weak.  Amazing analysis.......As for the Flakers bench, it really is abysmal.  If Bynum winds up missing some serious time we may be graced with a DJ Mbenga or Josh Powell sighting.  Celts bench is deeper from top to bottom, no questions about it.......I almost puked seeing the FRS Healthy Energy commercials the other night with their spokesman Derek Anal Fisher.  His quote "Everyone's ready to play in the first quarter.  But in the 4th quarter and the overtime, when  it counts the most, that's when your endurance needs to be there."  What a bullshit quote.  You played 27 minutes a night this season.  The reason you had plenty of energy in the 4th quarter this year is because you barely play most of the night.  Why isn't Monta Ellis the spokesman for this?  Please retire already, you lying, dirty scumbag.