KG is on a remarkable playoff run 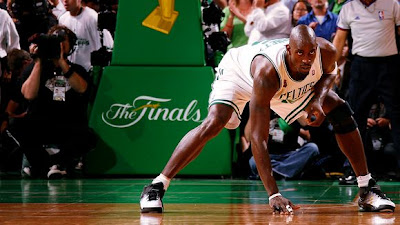 When media and fans give credit to the Celtics surprising playoff run this Spring most of the credit goes to Rajon Rondo. After that, you hear about how great a coach Doc is or how Pierce has shown again that he's the Truth. You also get the "I'm so glad Danny didn't trade Ray" sentiment. Further down the list, you have Perkins finally getting his due for his defense and the bench getting praise. The forgotten man is Kevin Garnett.

Why? Well because offensive numbers get the glory. KG didn't score a lot versus the Magic, but his defense throughout the playoffs has been historic. I was talking to tb727 the other day about how remarkable it is that everyone worried about how 2009/2010 KG would do against quicker 4's. Guys like Rashard Lewis and Antawn Jamsion. Even young quick 4's like Michael Beasley. In our conversation I stated that KG has totally shut them down and I need to write on this. Luckily for me before I even researched the stats, I came across a post on this very subject that does the argument much more justice. I contacted the writer and he has allowed me to post it on Celtics Life. If you are more than just a casual Celtics fan, please read the entire piece.

-By Andre' Snellings of Rotowire.com


I've been surprised that nobody is really talking much about what Garnett has been doing on defense this postseason. I've been watching basketball a lot of years, and frankly...I'm not sure I've ever even heard of someone having a defensive run like KG is on in these playoffs. Michael Beasley, Antawn Jamison and Rashard Lewis are all good-to-very-good offensive players. Two are recent All Stars. All are consistent 15 - 20 ppg scorers that are among the leading offensive threats for their respective teams. And most importantly, all were playing really well before they faced Boston and even did great against Boston...as long as Garnett wasn't on the court. To whit...


KG is usually given credit as a "defensive anchor"... a help-defender that you can build an elite defense around. And despite the injuries this year he's still that, as every way that we have to measure defensive impact would attest to. But in these playoffs, KG has been performing as a defensive stopper (someone that takes their individual assignment out of the game) on an absurd level.

Most of the time, when a defender is credited for winning a match-up against a good scorer, it is because they slightly limited the opponent's scoring and made them have to work extra hard for every bucket. The idea of "can't really stop him, just contain him and make him less efficient". If a defender takes a few points off their opponent's scoring average and 5% points off their shooting percentage, they are usually deemed to have "stopped" the player. But in this playoffs, KG is essentially cutting his opponent's scoring in half, taking 15 - 20% off their field goal percentage, and adding a full turnover. I know I'm biased because I'm a KG fan but really...how is this not news?

The narrative from every round thus far has been essentially that the opposing PF should be ashamed of himself for not showing up. Beasley has been catching major heat in Miami (heh), people are panning the Jamison trade for the Cavs, and everyone is gutting Lewis for his big contract. But there's one common denominator here...Garnett and the Celtics' defense (can't minimize the team defense as a whole, because everyone has been great and Perk especially has been a rock) have erased these guys. Terminated them. I know defense isn't as sexy as offense, but it just seems to me that this should be getting more attention than it has...