What the Hell Happened to...Jay Humphries?

He ended his long playing career with the Celtics.  And as you can tell from the above picture, the saying is true in that father time waits for no one.  Maybe you remember Jay Humphries.

Off the top of my head, if someone had asked me what kind of career Jay Humphries had, I would've said it was comparable to that of Frank Johnson.  But that would be a slight to Jay since he wasn't always the backup point guard that I remembered him as.  He was selected in the first round at pick 13 in the 1984 draft by the Phoenix Suns out of the University of Colorado. For his NBA career he started 557 out of a possible 778 games.

Through the 1985 and 1986 seasons Humphries started all 82 games at guard for the Suns.  He would go onto play for Milwaukee and eventually Utah, where I had remembered him as John Stockton's backup.  In February of 1995 he was acquired by the Celtics for Blue Edwards.  He'd only play 6 games for the Celtics in the 1995 season, and no playoff games and retired at the end of the season.  For his career he averaged a very respectable 11 points and 5.5 assists. 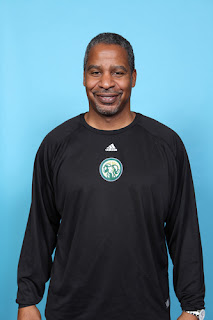 Humphries was an assistant coach with the Suns and and last year was the head coach for the Reno Bighorns of the NBDL.  However he was replaced by Eric Musselman.  The last place in the US Humphries could be seen was as an assistant coach for the Timberwolves in the Vegas Summer League in 2010.  However Jay went over to Asia (like Alton Lister) and is serving as the head coach for Stephon Marbury's Foshan Drailons of the Chinese basketball league.  If you look at the roster of guys, Marbury's the only one from America.  Do the rest of those guys speak English?  Or is Jay Humphries fluent in Chinese?  Perhaps Jay and Stephon hang out and Jay tells him all about his WTHHT article.