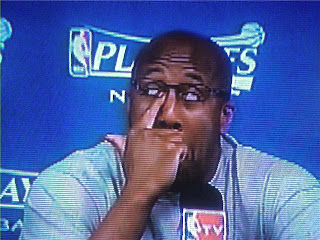 Some liken him to the next Jay Mariotti.  Apparently there's a rumor he likes to eat a certain thing, which doesn't exactly surprise me.  Whatever the case may be, it never ceases to amaze me how much Bill Plaschke sucks.  He really rivals Adande when it comes to his slobbering homerism for the Flakers.  Then he has the nerve to write this article about how Jazz fans jeer Derek Fisher at all instances and they shouldn't.  He's got some audacity writing that. Fisher was released from his contract with the Jazz in order to seek better cancer treatment for his daughter.  He conveniently decided to go back and play for the Flakers, the Number 1 nemesis of the Jazz the past decade.  Everyone knows many of the best doctors are in the NY area (in fact when Fisher brought his daughter in for treatment during that memorable playoff game, it was to NYC).  He could've done them a favor and looked to play for an East Coast team like the Knicks or Nets.  But he backstabbed them, like the lowlife he is.  Fisher's the dirtiest player I've seen in a long time and he's a snake when it comes to common courtesy.  The only remaining question I have is who is the bigger piece of shit, Plaschke or Fisher......Is that Mike Brown giving us a preview of what he'll do if the Cavs lose to the Celtics?  Wouldn't we be so lucky.  If Cleveland does advance it'd be in Brown's best interest to have an ear piece for each game where he listens to everything Gregg Popovich tells him to do.......I've been ragging on the Suns that I think they have zero shot vs lal in the next round.  Maybe I've been shortchanging them: during their impressive close-out Game 4 win over the Spurs, Doug Collins mentioned Phoenix having the best record in the Western Conference since January.......After the Spurs were knocked out, someone asked Manu Ginoboli how the Spurs can improve next season moving forward.  His answer was quite diplomatic, as expected.  Personally I think he should've just said "try our hardest to get rid of Richard Jefferson who fits like a square peg in a round hole with this team."