What the Hell Happened to...Blue Edwards? 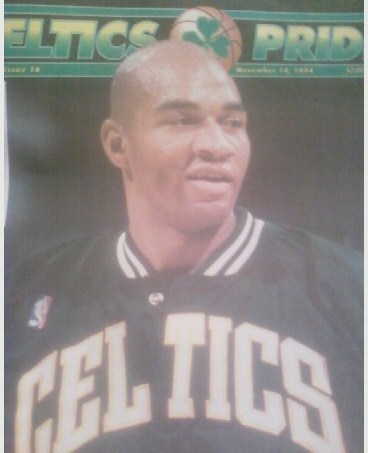 Theodore was called "Blue" by his sister when he was little because his sister saw him turn that color while choking.  (I suppose it's better than being named Anfernee.)  He was drafted by the Jazz in the first round of the 1989 draft after having a stellar college career at East Carolina University.  Maybe you remember Blue Edwards.

His rookie season for Utah, Blue made the All Rookie 2nd Team, which is the same honor current Celtics Kevin Garnett and Rasheed Wallace attained their rookie season in 1996.  His first 3 years in the league he played with the Jazz alongside Stockton and Malone.  After the 1992 season, he was dealt to Milwaukee along with Eric Murdock for Jay Humphries (some foreshadowing) and Larry Krystokwiak.  His first season with the Bucks he would lead tie the team in scoring, at 16.9 ppg, actually with Frank Brickowski. 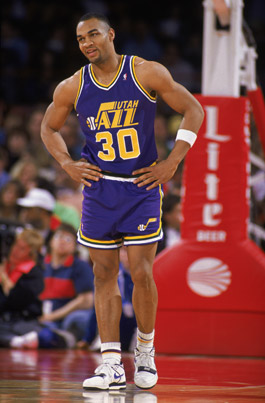 When the Celtics acquired Blue along with Derek Strong from the Bucks after the following year for Ed Pinckney, I was psyched, specifically for Edwards.  I sort of thought he could play the Reggie Lewis role for the team at shooting guard.  Basically he was an undersized small forward at 6'4.  My recollection is that his ball handling skills weren't up to par for a guard and for his season in Boston he shot a less than-Rasheed-like 25% on 3's.  He was only in Boston for half a season, dealt for the corpse of Jay Humphries and a 2nd round pick in 1995.  I don't remember specifically why he was moved.  That was the Celtics team that gallantly fell to a far superior Magic team in the first round of the playoffs in 4 games, before the Boston Garden was closed permanently.

Blue would finish out that season with Utah before being plucked by the Vancouver Grizzlies in the expansion draft for the 1996 season.  He'd play for Vancouver for 3 more years, and ended his career with the Heat in 1999.

The most interesting thing regarding Edwards since he was last heard from was his child custody case in Canada.  Here's the gist of it: when Edwards was exiled to play for the Grizzlies he was introduced to Kimberly Van de Perre, a waitress in Burnaby who sometimes served as a tour guide to introduce NBA players to women in that area (Where does one get a job like that?).   Van de Perre and Edwards decided to pursue things between themselves and she gave birth to their son Elijah in June of 1997.

Over the next 2 years there was much back and forth.  First the mother had him.  Then Blue had his actual wife step in and testify to the court of appeals.  Here was that synopsis:

The Appeal Court also dealt with the delicate issue of race, noting that while Elijah was the son of a black man and a white woman, his dark skin colour meant that he would always be perceived as "being black."
The judgment quoted Mrs. Edwards as saying that Ms. Van de Perre "couldn't teach him what it's going to be like to be black, and how he is going to be seen in the world as being black ... And reading books won't help."
It was a view the judges agreed with.

So after this and the kid was living with Blue and his family, the mother somehow was able to appeal again and in 2001 reversed the decision to the original verdict and received full custody of him.  After this Blue stopped visiting and paying child support. 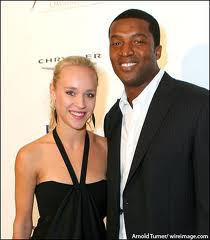 This caused so much drama that Lifetime made a movie about it, called Playing for Keeps (the US title is What Color is Love?).  In it, the actor Roger Cross played Blue Edwards' character, whose name in the movie was changed to Ty Rivers.  Ironically Cross (pictured to the right with his wife in real life) is married to a white woman.  Oh the irony of Lifetime's producers.

Not to start controversy either but Blue Edwards looks half-white to begin with; his skin color is light.  So couldn't the kid have remained with the mother?  How was Edwards' actual wife able to play the race card saying Elijah needed to know how to grow up black?  That trailer doesn't depict it accurately really either.  In it the Blue Edwards guy is very black, the girl is white and the kid is pretty black.  To the side is a picture of the real Kimberly and Elijah.  To me, Elijah looks half-black and half-white, so I don't see how Edwards' wife could've played that race-card.
Today Edwards is living in his native North Carolina, with his wife, Valerie, and twin daughters Britny and Whitny. He chose Charlotte because it is just hours away from his hometown, and he has plenty of family and friends in the area. Edwards spends the majority of his retired life spending time with his family, coaching basketball and individually training athletes.  Edwards has coached his daughters’ nationally-ranked AAU teams.

Other than coaching, Edwards’ interests range from testing the stock market to reading books.

***Addendum 11/13: I stumbled upon this tweet from Blue which I must say, really annoyed me:

Watching my LAKERS... not getting it done AGAIN...KB24 putting in WORK as usual. .THEIR d is HORRENDOUS ( notice the small letter)
— theodore edwards (@Tru30Blu) January 10, 2013

Really Blue?  Your Lakers?  I'm sure the Jazz fans who rooted hard for you back in the day can understand how the hell you became a Laker fan. Pfft.  But wait apparently someone asked him how the hell this happened.  Here's the response:

@Vinrok44 I'm a Laker fan because of Magic Johnson. Admired him from way back, followed the team since.
— theodore edwards (@Tru30Blu) January 13, 2013

I suppose it's sort of cool if he was a fan growing up of them and then returned to be a fan.  I'm assuming he wasn't a fan of them while playing in the NBA.  Surely you'd think a person's experience of playing in the league would make them a fan of the team.  I mean imagine if Paul Pierce reverted to being a Lakers fan after retiring?