We Miss you Eddie 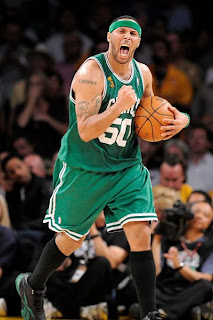 A few months ago when Eddie House was traded to the Knicks for Nate Robinson I wrote how we would miss Eddie's presence on the team. I think most would agree that has been the case. Apart from his production on the court, Eddie was a joy to watch. He was a great clubhouse guy which is a huge cliché but is actually really important to a team's success. With Eddie the Celtics were never out of a game. Every 3 he hit was followed by a raucous cheer by the Boston Garden crowd similar to what Scal gets every time he touches the ball.

Eddie was the definition of an X-factor. He had no fear and made big shots in big moments. He played his heart out every game. It's a shame that certain other players don't play with his passion. Sure, Nate Robinson might be a better overall player, but it doesn't matter if he averaged 20 points a game he'd never replace Eddie.

There is no sport where role players are more important than in basketball. What are the 90's Bulls without Steve Kerr or John Paxson? The Lakers without Horry? The Pistons without Tayshaun Prince? You can't just go out and get these guys at a yard sale, they are tough to find.

We made a poor decision getting rid of Eddie. Sports aren't just about wins and losses it's about forming bonds and connections with your team and your favorite players. I don't know if the Celtics would be better off right now with Eddie. What I do know is that whether or not the Celtics win this year, I would've enjoyed the ride a lot more with Eddie House on the team.