The truth is still there

"Rather than love, than money, than fame, give me truth."
Henry David Thoreau 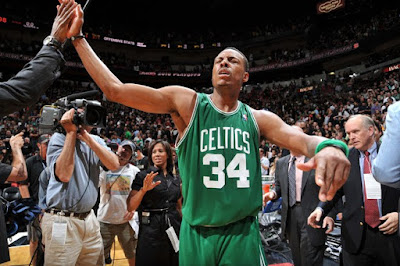 It is quite human to become addicted by the arrival of the new elements in our lives. The new friend, the new technology, the newest book in our library... as human beings we love to explore into the realm of surprise, the excitement of living the same day with completely new hopes. Routine is by far the most dangerous state a human soul can experience and yet, there are certain features that make our life be what it is. Our body is nothing without a soul, spirit or heart that combined with our mind fuel our aging bodies in the flow of time. And it is time which will erode progressively all the new fancies of life, the superficial and vanishing elements that serve us as distraction while we grow wiser and better. But in the end, experience, time and life will leave us with the core and soul of what each of us really is.

The current Boston Celtics are, were and finally will be embodied by their captain Paul Pierce. Many teammates have played alongside him since he arrived to New England in 1998. His game was not particularly flashy, explosive or addictive. He wasn't a 3 point specialist, not an athletic threat, his dunks would not make the top 5 nba reel and his leadership was far from proven. Paul Pierce was an old school scorer, shaped à là Bernard King. The kid was talented, but many fans directed their attention to his teammate Antoine Walker back then. He was far more entertaining, he made you love him or hate him with his chaotic and yet extremely talented game. When Toine faded, we still had Paul. He was still there when B side songs were played in the Garden, when the likes of Mark Blount, Raef LaFrentz and Ricky Davis were in the band's lineup. It was still the Guns N' Roses, but only Axl was standing.

When the dark years passed and the trades for Ray Allen and Kevin Garnett occurred there were pictures of the Big 3 and all you could see two men sitting around KG. Ray Allen was a mystery, everybody was concerned about his ankles and if he could play well the following season. All of us knew that KG would be amazing in the Boston Celtics because the league has never had a combination of skill and extreme athleticism ever. But what about that guy holding the #34 jersey? I remember feeling strange about it because 9 years later Paul was holding the same jersey and it seemed as a second marriage with the same woman. 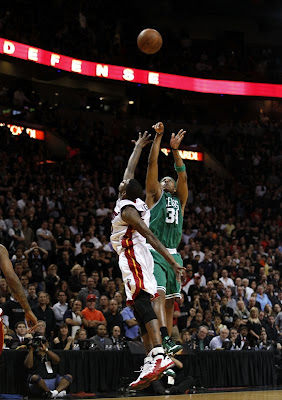 During that season we saw highlights of Garnett blocking and dunking, Ray hitting game winners and Rondo showing flashes of the All Star he would become. But come playoff time, Paul Pierce delivered the message, he was the captain and with his MVP play he lead us to an NBA title. It was the same guy that arrived here a decade ago but much wiser, a better all around player. Losses had made him look into himself to prove that he belonged to the elite: he improved his defense, his 3 point shooting, his passing...and above all, he became much smarter.

This season was no different, we focused on KG's knee, Rondo's amazing stardom, Rasheed overall disappointing play, Ray Allen rumor trades...and little has been said about the captain. We knew he had struggled with multiple minor injuries, and we wondered if he was physically done. And as usual, he is proving that he is the face of the franchise, the image and the essential identity of your Boston Celtics.

Paul Pierce may very well lead us to the glory this year. He has done it before, why wouldn't he do it now? The Boston Celtics are back into the spotlight, we are again contenders. The truth has spoken and is ready to deliver.

We can win the title...after all, Paul Pierce is still there