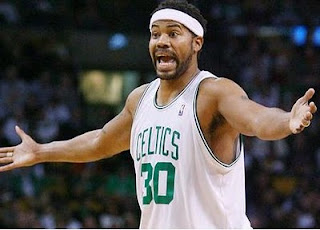 The cliché we kept hearing over and over again Saturday night was, “Will the Celtics flip the switch?” The idea being that the mundane play and demeanor of the C’s during the regular season would suddenly turn into an impassioned championship run. I mean, the Celtics already won a championship, why do they need to try during the regular season? Treating 82 games like the pre-season certainly ticked off a lot of fans (hence the booing and what-not). However, we could always cling to the hope that come playoff time, the flip would be switched.
Where did we get this idea? From everyone’s favorite Celtic, Rasheed Wallace, of course. Sheed pretty much stated that he wasn’t going to turn it on until the post-season. Before Saturday’s game he acknowledged his regular season performance as, “nothing to write home about…it was so-so” but then admitted a switch would flip come Game 1, “…that’s what gets me motivated, is the playoffs”. So, who better to keep a keen eye on than the apathetic yet loveable Sheed?

Well, Game 1 came and there was a big contribution from the second team. Only, Sheed wasn’t a part of it. Tony Allen and Big Baby came up big for on both sides of the court. Sheed just kind of walked around I guess. Wallace played for 14 minutes. In that time, he went 1/1 and racked up 4 points, making 2/3 free throws. He turned the ball over once but did get a single defensive rebound. Had the switch been flipped? If this is what that looks like, hopefully not. I'd expect more. On the other hand, Sheed did not attempt a single 3 pointer; so, that’s a good sign. With Garnett suspended for Game 2, Sheed’s playing time is likely to increase. So, hopefully he can actually step it up. It did look like the rest of the team turned it on though. There was energy and passion – it kind of brought back memories of 2008. Will Sheed catch up? Maybe. He usually does take his time.
Sheed Play of the Game:
With 1:12 to go in the first quarter, down by 3. Sheed runs into and fouls Mario Chalmers after turning the ball over to Joel Anthony. This is the Sheed play of the game because we got to see his famous “What did I do?” face. That’s why we signed him!
Shameless Plug:
I'm new and this is my first post for CelticsLife. Check out my thoughts on other Boston sports teams at Saver Sports!