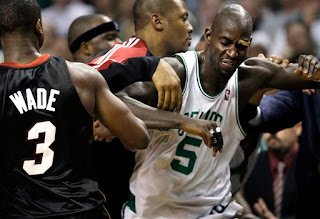 
Here is the statement from the league:

NEW YORK, April 18, 2010 – Kevin Garnett of the Boston Celtics has been
suspended without pay for one game for striking the Miami Heat’s Quentin
Richardson in the head with an elbow, it was announced today by Stu
Jackson, NBA Executive Vice President, Basketball Operations. Richardson
has been fined $25,000 for his role in the altercation.

Lame lame lame. Richardson instigated this mess and he gets off with a fine only. A Heat player grabbed KG from behind. A natural reaction is to fight to break free. If Q's big mouth wasn't in the area it wouldn't have gotten elbowized. The NBA is so soft.