Play Glen Davis and see you in Cleveland 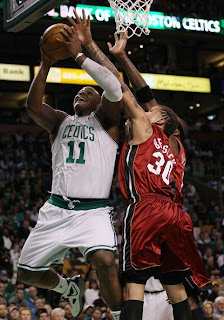 No one was going to deny Dwayne Wade on Sunday afternoon. He's a great player and you have to expect he's good for at least 1 win in a series. I put the chances he shoots like that from 3 again in tonight's game at about 1.4 percent. Just about the same chance Jermaine O'Neal has of making a jump shot. I fully expect the Celtics to bounce back and win tonight, but they would make it much easier on themselves if they played Glen Davis more minutes.

I know it seems like I write about Davis every column now, but it's because he's my favorite Celtic since Leon Powe. He's the new Powe with a jump shot. He takes charges, crashes the offensive glass, and is pretty much an indispensable player on this team. We all know about the incredible performance he put on in Game 2 (which he sat most of the 4th quarter by the way). So I ask, why did he only play 15 minutes last game?

It's so obvious to me that the issue here is minutes. Play Glen Davis 20+ minutes and see what happens. If they do this and the Celtics lose I will never write a Glen Davis column again.  But I don't see that happening. Davis is just not nearly as effective when he gets less than 20 minutes of playing time. Also, go to him more down low. He'll get his shot blocked a lot but he'll get you 8-10 free throws as well.

If it aint broke don't fix it, right? Why not just keep going with what was working so well in Game 2? The reality is we were a Paul Pierce shot away from losing Game 3, had to come back from 14 down in Game 1, and lost Game 4. Davis was a +15 in Game 1 and a +24 in Game 2. Then he plays less than 20 minutes in both games 3 and 4? Is there some clause in his contract saying he's not allowed to have two straight big games? Hell, I almost wrote that we should start the guy over KG, but KG has played well as of late.

We need to close this series out tonight because there is no way we are winning game 6 in Miami. Then that leaves a Game 7 vs. Dwayne Wade with all the pressure on us. I don't know about you, but that doesn't sound very pleasant. Play Glen Davis and bring on the King.