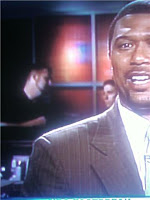 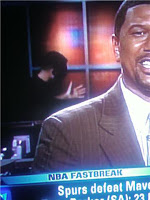 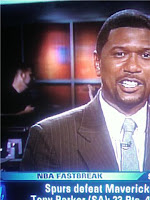 Anyone see the wonderful NBA Fast Break show on ESPN 2 Friday night after the Jazz Nuggets Game 3?  Took these pictures from them.  Observe what's going on in the background while Jalen Rose speaks.  2 guys having a full blown conversation.  You'll notice in one picture the guy's taking a sip of his Snapple or something (coming out of Jalen's neck).  How can ESPN air something like this?  It looks like it was assembled in a high school basement somewhere.......When I was talking about how awful Eric Snow was on NBA TV, I certainly didn't want him replaced with Rick Fox.  Don't think Fox replaced him permanently, but there he was late Saturday night after the Flakers were demolished by the Thunder, looking like the prissy prick he is.  I hope this is similar to Alaa Abdelnaby, gone from NBA TV after like a week and never heard from again. [To point out I don't dislike all NBA TV people; Steve Smith and Dennis Scott are fine, Brent Barry, the best amongst the 3].......Why exactly is Tony Allen's nickname Gucci?.......Will we be able to watch another Celtics game this year in the playoffs where Michael Finley's sister being the head cheerleader for Doc Rivers' high school team isn't mentioned?  Looking bleak.......I bet Joel Anthony's parents resemble former Celtics Sam Cassell and Eric Williams.......Never get sick of seeing Bob McAdoo lose.  He's the Heat assistant coach now and I know he still resents Boston from his lousy experience there.  I actually worked with his daughter at my former company, and she even told me he hated playing in Boston.  She was really nice though.  I used to ask her for inside information about the Heat.  She didn't have much to provide.  She said she was once set up with an NBA player to go out with but it was a waste of time.  She'd never disclose to me who it was but I got the impression it was Ricky Davis lol.......Personally I think Brandon Roy should pronounce his last name like former goaltender Patrick Roy, who pronounced it ʁwa