Perkins Needs to Lay Richardson Out 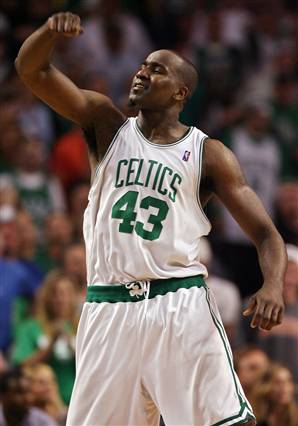 So I'm sure everyone knows about the Quentin Richardson/Kevin Garnett squabble from last night already.  KG in his Post Game interview said all the right things about checking up on his injured teammate Paul Pierce. Quentin Richardson on the other hand (a player who has history with Pierce) had this to say:

As for the incident, Richardson wasn’t sold on the severity of Pierce’s injury, which was identified as a shoulder issue by the Celtics’ forward after the first round Eastern Conference playoff game.

“He’s on the ground crying and I don’t know what’s going on,” the Heat guard said. “Two actresses over there, that’s what they are.” When asked he was surprised the confrontation escalated, Richardson responded, “I’m not surprised at people’s actions when I know them better than that, when they’re not those characters they portray in this movie. They’r not who they say they are, Garnett and Pierce. They’re good basketball players, nothing other than that.”

Richardson continued when asked if he had said anything to Pierce.

“I said to [Jermaine O'Neal], I said, ‘He’s OK,’ because I knew nobody just touched him,” he explained. “How did he fall? Was he taking another break like he do so many times? Sometimes he falls like he’s about to be out for the season, and he gets right up. That’s all I said. “ 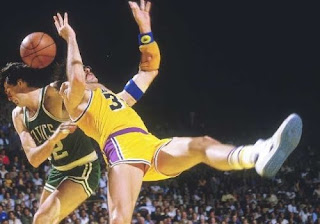 If you've been paying attention to this site the past month, I've been practically begging the Celtics to rest Kendrick Perkins. The knee tendinitis (if that's what is it as the Celtics can be deceptive with injuries) has made him a shell of the Perk we saw in October, November, and December.  The only way he'll get an extended rest now is with a multi game suspension. Ever since the Pacers/Pistons brawl the league doesn't allow taunts, mean looks, or any kind of playground teasing, let alone actually making contact with someone. In the 80's Richardson's comments would have resulted in a Celtic knocking him the f*%k out (Haven't watched "Friday" in a while. Note to self.) So Q gets decked and Perk gets healthier. I would use the two birds/one stone analogy, but why would anyone throw a stone at a bird? That's ridiculously cruel. Just throw it at Kobe or something.

I believe Robert Parish received a one game suspension when he straight cold-cocked Bill Laimbeer (video after the jump). Not sure Kevin McHale even got suspended when he clothes-lined Kurt Rambis (video also after the jump). Problem is if Perk punches Q in the face, Stern will suspend him for the entire playoffs. We just want him out for this series, so he can rest the knee (Miami's bigs suck anyway). So how hard a hit can Perk give Richardson to get him some rest, but not disqualify him for the entire playoffs?