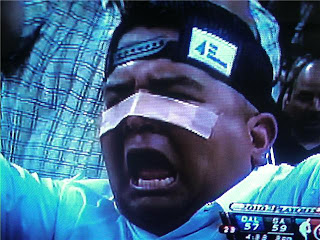 Great job Dick Stockton saying "Dejuan Butler with the dunk" during the Mavs-Spurs game last night.  Although I don't think I could've expected more........Does Charles Barkley ever pick an underdog?  He picks the higher seeds in every series and gives the lower seeds no shot.  Then he's astonished when someone like the Spurs or Bucks puts up a fight.  I know people like him because he's entertaining but his insight is worthless and so are his predictions.......If the Flakers beat the Thunder, you can pretty much book them in the Finals.  The two biggest threats were the Nuggets and Mavericks.  Dallas is already eliminated and Denver will be after tomorrow.  I'd love to count the Spurs in there but their backup "big" men combination of Bonner and Blair don't have a shot at defending the Flakers front line.  Thanks again David Stern for having a watered-down NBA.