The King that never was 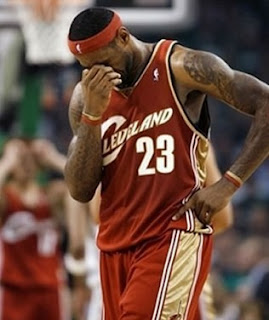 Maybe it is not Lebron's fault after all, maybe he is just a product of the modern world. He is an instrument of how society builds itself in the last decades. Maybe he is not to blame for what he represents and what he means.

When someone mentions his name I can't help of thinking of Fast Food. It has an ideal package, the perfect marketing, a global result of the best promotion and probably the best tasting product in the market. You can buy it everywhere and everyone has tried it. The company is rich, he is rich, everyone gets rich while the rest of the world fattens in silent slumber while we grow the myth.

LeBron James has been designed to win by the league, and everybody knows this is true. Think about some of the following truths:

- He never gets fouled out. I mean, it is insulting for the rest of the players to know that no matter how physical he may get, he will never be punished by the referees

- He is a walking steroid. Are players tested for this? Guys like him or Howard are clearly muscled to perform unearthly physically plays. I am sure someone has ignored this fact.

- He travels all the time. Sometimes he even takes 4 or 5 steps in the direction of the basket. I mean, come on...what are basketball teachers going to say when kids ask them about it? 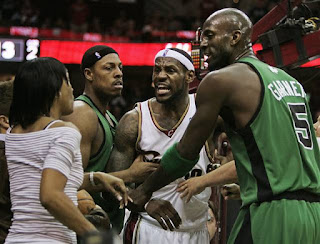 Lebron James is not a role model for anything, despite all the efforts displayed by Stern and his colleagues:

- He insults his own mother during a playoffs game. It was embarrassing to see KG and Paul calming him down

- He disrespects opponents in several ways, at the beginning and end of the games. It is well documented that he didn't even shake hands with the Magic players when he got eliminated from the playoffs last year

- He disrespects the ballboys as was published lately. And yes, he did see the kid coming.

- He doesn't pass the ball when critical moments arrive, doesn't trust his teammates as Larry, Magic or MJ did. It must be quite hard playing for the Cleveland Cavaliers. 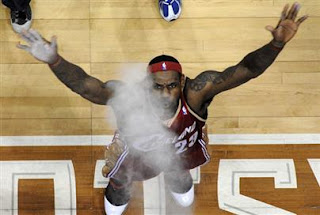 Lebron James is not a genuine product. It is just a copy of previous genetically altered league products:

- The powder throwing pregame ritual has already been made. KG has been doing it for years. Be creative, Lebron

- He is like Venom in the Spiderman series. He is a physically improved version of Kobe Bryant, copies Kobe's moves which in turn are an imperfect mirror of Michael Jordan's signature plays.

- As all copies, it loses class and IQ in the process. Kobe at least has won the rings before showing off and playing his show. He has trusted teammates as Pau Gasol or Shaq O'Neal. Kobe can defend (go and tell Westbrook) or pass the ball. He is just a smarter copy. Lebron can't simply do that, he doesn't have that talent. The copy is stronger but less complete...just simpler. But his envy for the aforementioned players is bigger. He wants to be like them, he imitates them. Nothing original there.

And finally Mr James is no King, he was won nothing so far in the league. Who came up with this nickname in the first place? Maybe it is time to play some Metallica in the Garden: