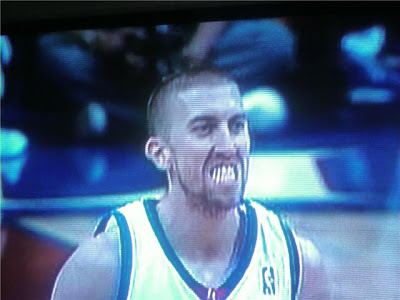 Are you kidding me with TNT last night?  The Celtics are up 33 in the 4th quarter and they have to cut to the Suns-Blazers game which is already being televised on NBA TV?  I pay money for League Pass to get every Celtics regular season game but then have to be at the mercy of their particular fancy for whether or not I get to watch a playoff game?  That's not right and something needs to be done about it.  Please begin by writing a complaint to Turner Sports here.......Sundiata Gaines may have had the best name in the league this season, but it may have been trumped by his new teammate, Othyus Jeffers.......Took this picture of Steve Blake from my phone on his last night of the season when he had a triple double against the Flakers.  He is a free agent this year but instead of having a career year I guess he was hoping his final game would suffice.  His expression says it all, almost like "please overpay me and I can assure you I'll become a corpse at the end of the deal"......As you can see there's a lot of commercials on TNT for Ice Cube's upcoming television show on TBS called "Are We There Yet?"  With the release of this "family show" it is official that I'm not afraid of Ice Cube anymore.......I can't believe the 1 foot drop from the Cavs' court and how dangerous it is.  It's hard enough for coaches to keep an eye on where everyone is on the court, but then I notice Vinny Del Negro looking around at this feet making sure he doesn't lose his balance and fall off.  You see all the players on the bench but only up to their socks as their feet are below the court.  Why are they the only team whose court is above the sideline?  It's like they're pharmacists playing basketball.