There will never be another Larry Bird 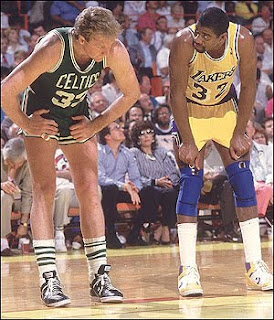 I didn't want any lovefest...hugging, slapping high fives....you're there for a reason, you're there to win a game-Larry Bird

For anyone who has not seen HBO's "Magic and Bird: A Courtship of Rivals" please do so immediately. Most of us Celtics fans know Larry's story, but it is fascinating to see how the relationship between Magic and Bird grew through the years. It seemed Magic always wanted to be close friends with Larry during their playing days, but Bird didn't want to be pals with his fiercest rival.

It was only after their playing days were over, and especially after Magic announced he had HIV, that their relationship really bloomed. Still to this day they don't talk that often, but will always be connected. One of my favorite parts was when Magic said about Larry's private nature, "He’s very private, but if he’s your friend, you got a friend for life. And Larry Bird is a straight shooter. He’ll tell you when he doesn’t like you. That’s one thing I wish I could have that he has that I don’t have.”

The documentary was full of amazing quotes from Larry. You can see why he is one of Boston's most beloved athletes ever. There is nothing fake about Larry Bird. He was all about winning and didn't care about anything else. He embodied the tough, gritty, honest attitude of New England sports fan to the tee. Can you imagine Lebron saying, " I hope it killed him, I hope it ate him up inside" if Kobe lost to him in the finals. That's what Larry said about Magic and you know it's the truth. Players these days are all friends and Larry didn't believe in that.

Bird never sold out. Sure, he did a few commercials, but even then he made the commercial crews come to his hometown of French Lick to film it. If you haven't seen that commercial please YouTube immediately. Classic 80's right there. The guy even mowed his own lawn. Hell, the downfall of his career started when he hurt his back building his mom's driveway.

Basketball wise no one played like Bird. Last week Jeff Van Gundy (like the idiot he is) said Lebron was the best passing forward ever. Obviously he hasn't watched any Larry Bird clips lately. The guy saw the court like a point guard. I'd argue he might be the best passer ever period in terms of pure court vision. He dove for every loose ball like he was a guy on a 10 day contract. He played with a flare and passion for the game that only a handful of players ever have. He was one of the most clutch players ever and knew it. He got in fights with Dr. J, Kareem, and basically the whole Lakers team. He didn't back down from anyone. There will never be another person that plays like him again.

One of the most interesting parts of the show was how race played a factor. One memorable quote was Magic asking a black man from Boston why he was rooting for the Lakers and the guy saying," I'm not going to root for that white boy." It's sad that race has to always be an issue when it comes to basketball. Magic and especially Larry didn't care about that. I do think it may have motivated him to be the best because there is a perception to this day that whites aren't as good as blacks at basketball. It's sad but that is the reality.

By the way, I will never respect Isaiah Thomas or Dennis Rodman ever again. Both claimed Bird was overrated because he was white and that if he was a black player he'd just be average. Are you serious? If not for a back injury that literally made him peel over in games, Bird's numbers would be even more ridiculous. He won 3 titles and got to 5 finals in an 8 year span.

Being the first day of the NCAA tournament I think it's a good time to recognize the most impressive NCAA tournament run ever. Larry Bird taking Indiana State to the finals is the equivalent of taking Cornell to the finals. If there was ever such thing as a one man team that is it. I truly believe to this day it is one of the most underrated sporting accomplishments ever.

The most touching part of the documentary was Bird's reaction to Magic's HIV diagnosis. The pain in Larry's eyes was real and you could tell he lost passion for the game of basketball after he heard the news. I think that might have been the first moment Larry saw Magic as a friend rather than a competitor.  It's sad that both of their careers ended too early.  Bird talked about how he should've retired after the 1988-1989 season but his comepetitive drive kept him going.  I think we tend to overlook that a lot with athletes. We hammer them( I am guilty of this) but don't think about how truly hard it is to walk away from a game that has meant so much to them their whole lives.

All in all a truly amazing documentary for both Magic and Bird fans.  For those Lakers fans(and I hope there aren't many) there was a lot of very interesting information on Magic's life outside of basketball and his experiences after the HIV diagnosis. It was also great to see the clips of Magic and Bird playing together on the 1992 Dream Team which is still the greatest sports team ever assembled.  For us Celtics fans let's not be sad there will never be another Larry Bird. Rather, let's be thankful that Larry was a Celtic. The memories of him will always be with us.