Does Perkins just need some rest? 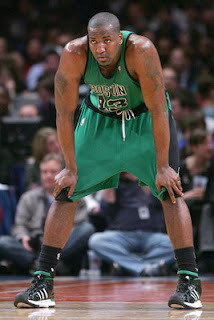 We often only think about the Big 3 when it comes to rest and minutes and that should definitely be a priority because of age.  In the past week though I heard Tommy mention Perk having plantar fasciitis in Tommy and Mike's Mailbag and then last night Donny Marshall said on the broadcast that Perkins has no lift right now. Perkins is not the same player he was in the beginning of the season or last year in the playoffs. Back in November and December you could have easily argued that Perk should be an all-star... and many fans did. Astute fans said he had been one of the Celtics top performers up until that point. As I guess is the fickle nature of sports fans, since his struggles began many have turned on Perkins. Where he was once considered with Rondo the future of this team, his stock has seemed to plummet in the eyes of many Celtics fans. I don't share that view. I believe that like the captain has admitted to doing, Perkins is simply playing at a health level nowhere near 100%

I believe the best course of action would be to sit Perkins for a few games and split his minutes up between the well deserving Glen Davis, the less deserving Rasheed Wallace, and Shelden Williams. The Celtics are not going to win a championship unless all of their key players are as close to 100% healthy in the playoffs as possible. Kendrick Perkins is one of those key players. Sit Kendrick now, so that the beast can be whole again.