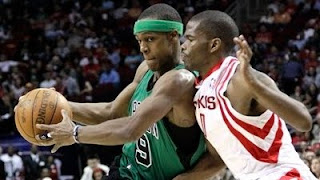 The Celtics played a solid game for 48 minutes, holding off the Rockets on a couple of different occasions to hang on for the win.
Unfortunately the Hawks won at the buzzer tonight (thanks Stephen Jackson for ruining  my night and missing 2 clutch free throws down the stretch) so Boston couldn't gain any ground.  However for anyone who had the Houston feed note that the comment made by the Rockets announcer about the Hawks having the tie breaker over the Celtics if they finish with the same record is actually incorrect; if the Celtics win their division, that trumps the head-to-head, so Boston will finish in 3rd.

Solid win tonight that they really needed since I expect the next 2 games vs Dallas and Utah to be considerably tougher.